Fritz Lang’s classic thriller “M” was released on May 11, 1931, ninety years ago.  It’s a gripping film about a serial killer, a town living in fear, and the criminal underground more concerned and competent at catching him than the cops.  Films of such dark topics were exceedingly rare in those days, Hitchcock only creating his first films in the late 1920s.  It still stands up with films of today, not needing blood or shock value to disturb its audience. 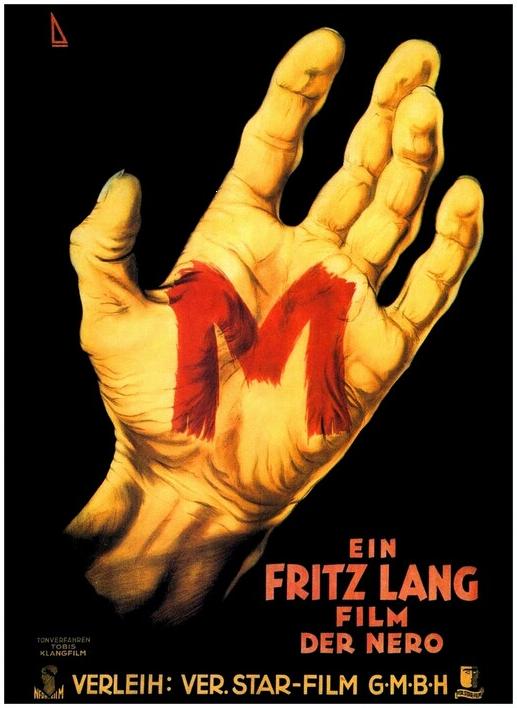 Peter Lorre plays Hans Beckert, a serial killer with a compunction for killing children.  And every time his desire comes on, he whistles “In the Hall of the Mountain King” by Edvard Grieg, which was already a haunting piece of music.  The townsfolk live in fear as their children go missing.  We never see the murders, but the sight of Beckert’s shadow and the floating balloons he used to lure the children are enough to give you chills.

Beckert terrorizes the town with his actions, leaving people paranoid, incompetent police baffled, and the criminal underworld so frustrated they decide to catch the murderer themselves.  It’s a “police procedural”, psychological horror, and social statement all in one, about whether the mentally ill can be held responsible for their actions.  At many points, the audience almost feels sorry for Beckert until we are reminded of his crimes.  The chase, the capture, the “trial” by the criminals, and Beckert’s pleas for understanding make for one of the most memorable endings in film.

And then, we are left hanging, no resolution or happy ending.  We never learn Beckert’s fate, what happens to the criminals who were going to kill him.  All we are the left with is Frau Beckmann, mother of Elsie Beckmann (the first victim) giving a warning to the audience.

“M” is also noticeable for Lang’s use of sound.  Unlike most early “talkies” that filled them with dialogue and music, “M” was sparse.  Words were only spoken when necessary, with intentionally long periods of silence.  And the two minute long camera shot of the beggars’ hideout is all the more amazing considering that steadicams wouldn’t be invented for another forty five years.

Fritz Lang had a long and successful directorial career both before and after “M”.  “M” was Lang’s first “talkie”, but it wasn’t his first groundbreaking film.  1927’s “Metropolis” (available on youtube) remains one of the most important, influential and stunning science fiction films ever made.  After his escape from Nazi Germany following the release of “The Testament of Dr. Mabuse” (which Joseph Goebbels censored) he created many classic films in Hollywood (e.g. “The Big Heat”, “Cloak And Dagger”, “While The City Sleeps”, among others).

“M” isn’t just a psychological horror film, it had political and social commentary, something Lang put into many of his films.  The National Socialist Party were already well established and rising in power within Germany.  “M” was Lang’s criticism of “othering”, of his concern with the Nazi Party’s language and demonization of jews (such as Hungarian-born Peter Lorre, who also escaped Germany for the US) and other minorities.  Hollywood prevented Lang from including a scene in “The Big Heat” (1953) damning racism and the lynching of Black people.

Lang’s concern for decency in society was a strange dichotomy, considering that he was known for horrific and abusive treatment of his actors and film crews.  Hitchcock (again) was abusive, but was a sweetheart compared to Lang.

As mentioned above, Joseph Goebbels prevented the release of “The Testament of Dr. Mabuse”, but he recognized Lang’s talent and wanted him to make propaganda films for the Nazis. Unsurprisingly, Lang was mortified by the idea, but he played along until he could effect his escape, first to France and then the US.

“M” is now in the public domain, free to watch and download.  You can find it on the Internet Archive, youtube and elsewhere.  It is one of the highest rated films on Rotten Tomatoes, and revered by many film buffs and art critics both for its story and Lang’s filmmaking.

And since I mentioned Vangelis recently, here’s “The Friends Of Mr. Cairo” by Jon and Vangelis, a paean to the Film Noir era, was released in fall of 1981.  It’s rare that a twelve minute song gets played on the radio.

Well, This Sucks: Selfish pilots, AGAIN » « How Feelings Can Change….