Richard Garriott (aka Lord British) created the Ultima game series beginning with Akalabeth and Ultimas I, II and III. But it was his next effort, “Ultima IV, Quest Of The Avatar”, that would change everything.  Released by Origin Systems on September 16, 1985, it was a groundbreaking game then and remains one of the most influential today.

Ultima I, II and III were among the first “open world” computer games, with entire planets to explore, along with towns and even flying in space. But prior to Ultima IV, games were primarily “hack and slash”: read the background story, buy equipment, kill monsters, level up, repeat until you fight the final battle. In the days of minimal computer resources (e.g. 48KB of RAM and running off floppy disks), these and others like Elite were the most expansive games on offer.

Then Ultima IV came along. It didn’t just break the mould, it smashed the entire potter’s wheel. This wasn’t a game of killing and looting, because there was no “big bad” to defeat. It was a moral tale and adventure, about the player fulfilling the “eight virtues”, learning and deciding right from wrong. It changed game narratives and forced companies to create much more immersive gaming experiences, design realistic worlds to explore, write dialogue, storylines, give NPCs with far more depth.

The New Yorker: The Computer Game That Led to Enlightenment

The healer, as well as the sorcerer and his legion of resurrected bones, were little more than four-color graphics, crudely animated against the simple playing screen of the computer game Ultima IV: Quest of the Avatar, which is turning thirty-five this year. Compared with contemporary games, this two-dimensional adventure is an anachronism. From an aesthetic point of view, there is little to recommend it, save for the invigorating nostalgia that it induces in those old enough to remember the original. Nevertheless, the journey to fulfill my character’s spiritual destiny was starting to feel a little personal. Over video chat, the game’s developer, Richard Garriott, explained that this feeling was exactly what he wanted players to experience. “You yourself are the character—it is not an alter ego,” Garriott said. “It is your moral compass guiding their actions.”

Garriott was an avid player of Dungeons & Dragons and a compulsive reader of J. R. R. Tolkien’s “Lord of the Rings” trilogy; he wanted his next game to feel like a living world with its own mythos and history. [. . .] By the mid-eighties, the phenomenon known as the Satanic Panic was reaching its peak, with many conservative and religious leaders viewing role-playing games such as Dungeons & Dragons as corrupting influences, turning young people toward witchcraft and violence. The mother of one Ultima player was so horrified by the image of a demon on the cover art for Ultima III—which Garriott told me is based on the devil Chernabog from the Walt Disney film “Fantasia”—that she sent a letter to Garriott, who was twenty-two, calling him “the Satanic perverter of America’s youth.”

It was the fan mail that set Garriott on a path toward reimagining what a computer role-playing game (C.R.P.G.) could do. In these letters, people described how they played the first three Ultimas, which were open-world games that did not require a linear path to complete, giving players the freedom to steal from shops or kill townsfolk. The letter writers explained, according to Garriott, that “the easiest way to gain power was not to play as a good guy.” He was despondent. “I inadvertently made games that drove the players to act dishonorably, as this was the path of least resistance.” What if, he wondered, there were a game in which your moral choices had consequences? He wanted the next installment of Ultima to reward honor and courage, and to penalize players for casual depravity. Garriott’s family and colleagues warned him that players might feel as if they were being punished for having admitted to enjoying robbing and murdering, but Garriott ignored them. “This was the art I was compelled to make,” he said. 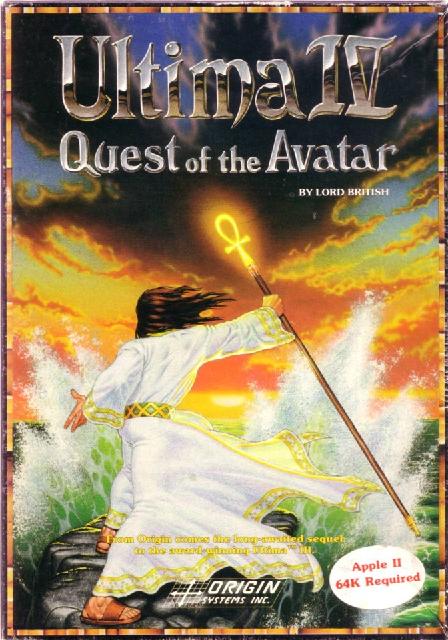 Ultima IV’s game screens and designs contained more colours and detail than earlier games, but gameplay was very much the same in games I to IV.  It was the storyline that made it a classic.

You can read more about Ultima IV at Fandom.com and on wikipedia.

A fantasy roleplaying game that debuted on an Apple computer? Yep, Ultima IV — first released for the venerable 8-bit Apple II in 1985 — was certainly that, but more importantly, it heralded a remarkable shift in tone for this series about an inter-dimensional hero (that would be you) who traveled to the medieval realm of Britannia to save its denizens from monstrous evils.

But instead of tracking some maleficent bad guy’s henchmen headed for a frightful final smackdown, Ultima IV bid players follow the road to self-discovery, pursuing a “virtuous life” and seeking “Eight Virtues” scattered throughout the realm.

The reward for gaining access to the game’s celebrated “Codex of Ultimate Wisdom”: Avatar-hood. Alas, for all Ultima IV did to transcend gaming’s narrative clichés, few games since have managed or even tried to emulate its uniquely contemplative quest vibe.

Here are the title screen and a gameplay screenshot: 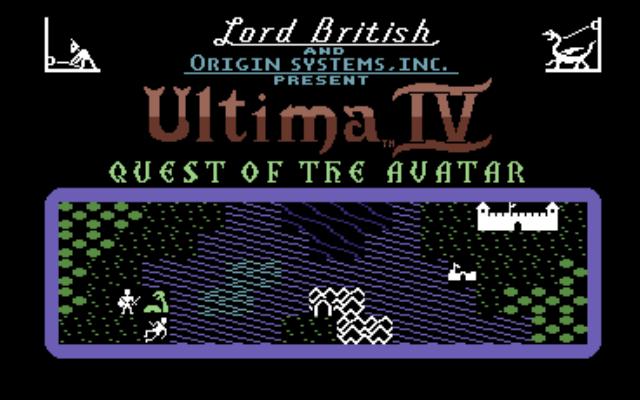 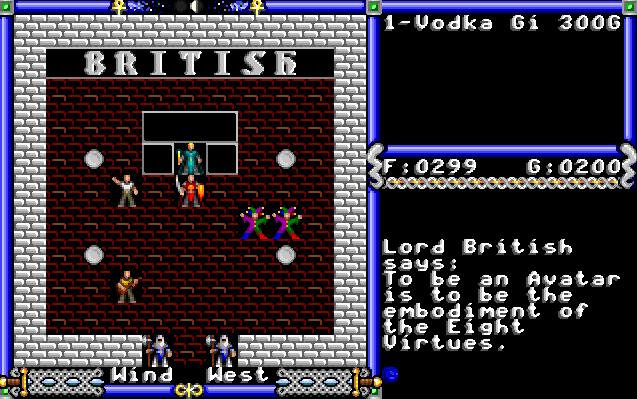 And here’s is one fan’s review and appreciation of the game:

You can read more about Ultima Underworld at Fandom.com and on wikipedia. 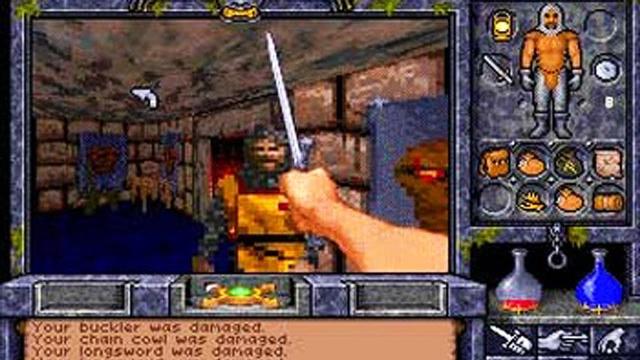