I said rally and not protest because it was more supportive of people in other countries, not about problems with police here.  There were 10-12 different speakers and presenters over a roughly two hour event, and a nine minute long silence at one point.  It wasn’t overwhelmingly loud, but the crowd was several hundred strong.  It was also noticeable and predictable which foreigners weren’t there.

My facebook page post about it is public, so you should be able to view all the pictures without being logged in.  There are about three dozen photos, easier to leave there than hog bandwidth here.  As the tag says, “my lousy photography” because my phone’s camera isn’t the best.

Presentations were in many forms: singers, discussions of politics, the victims of police violence, their own experiences (two said they came from St. Louis).  They also made sure to mention all different people – cisgender, Transgender, Non-Binary, Disabled, and others.

Unlike a lot of protests, rallies and parades, all the BLM events I have heard or read of online were inclusive or didn’t mention specific groups.  BLM has had a noticeable focus on inclusivity, not exclusion as other events and groups have done.  What the Los Angeles LGBT group did to Black Lives Matter was shameful.

There was one suprising moment halfway through.  One of the speakers gave a planned announcement in support of Hong Kong and against the criminal “extradition law”, and an attendee attempted to climb on stage.  I don’t know the full details, so no comment or speculation.

There are a lot of schools that discriminate in hiring foreigners to teach.  It’s sadly all too common in various Asian countries.  “Native speaker only” is usually code for white, and some job ads placed by recruiters illegally specify appearance (the school and the recruiter blaming each other, neither taking responsibility).  I previously worked for an employer who refused to hire a British woman with a Master’s Degree in Education solely because she was of Indian descent.  She was better qualified than anyone I’ve ever worked with.

If there are any instances of Black foreigners being targeted by police in Taiwan, I haven’t yet heard of any, though I may simply not have been told.  The ex-pats I do know (friends or casual acquaintances) have never reported any.
Below is just one of the pics.  It was reduced, hence why it looks terrible.  The originals are on the facebook post, untouched other than facebook processing them. 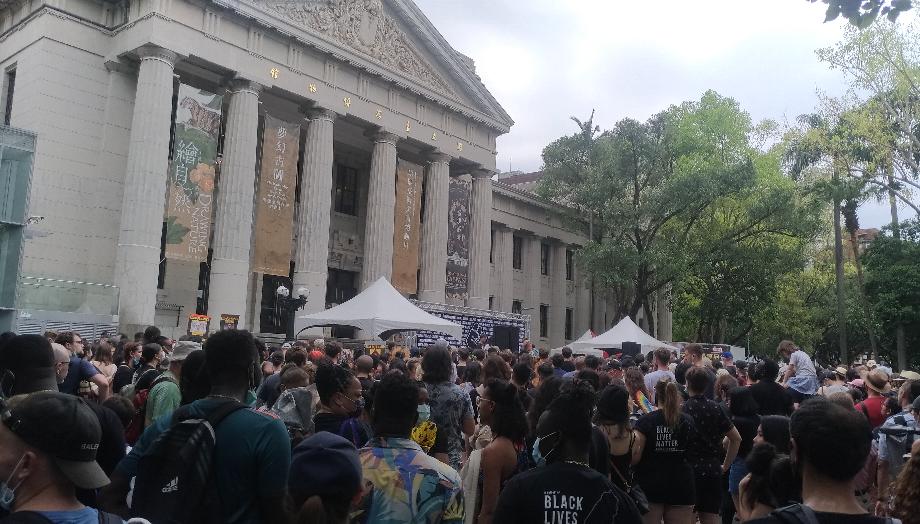 There was also a beach clean up event on Saturday which was planned and advertised two months ago.  I don’t know how many foreigners missed today’s event to go there, but I do know certain . . . individuals (because I can’t make myself call them people) would never have attended today’s event, even if there was nothing to do today.

Will Anybody Watch? : A last minute pride event for 2020 » « Deliberately Chosen: Trump loves anniversaries as much as Al Qaeda