Joaquin Phoenix is right handed, as can be seen in an autograph scrum at an airport.

So why did those behind the current “Joker” movie choose to make the character left handed?  There are many examples over the years of the Joker being right handed, in comics, in movies, etc.  No explanation has been given, not even “he used the left to mask his handwriting”.  If he wanted to do that and write fast, he could have bought a used typewriter.  Hunt and peck typists work faster than non-ambidextrous people writing with the unnatural hand.

Over the centuries, insulting and false characterizations of left handed people have been made from “sociopaths” to “pedophiles” to “mental deficient” to “satanic”.  Being non-cishetero was also used as an insult, but (a) it no longer is, and (b) non-cishetero people are more likely to be left handed, especially those with XY chromosomes.  There are no scientific papers I can find that show any link between criminality and handedness, though attempts to link mental health to handedness (usually schizophrenia) have been repeatedly tried.

One historical but anonymous sociopath was Jack the Ripper.  Claims of left handedness have been made for decades based upon one injury and no other evidence.  One of his victims was slashed across the throat from the victim’s left side to the right.  (See A below. Please excuse the low-end stick figure image, but it makes the point.)  That allegation presupposes that Jack the Ripper was facing the victim, carrying a knife openly in his left hand, and she made no attempt to defend herself, turn or run as the blade struck her throat.

Or, there’s the more likely option: Jack the Ripper was right handed.  He attacked her from behind (B), and with the knife in his right hand pulled it across her throat, slashing her throat from left to right.  She had no chance to escape or defend herself. 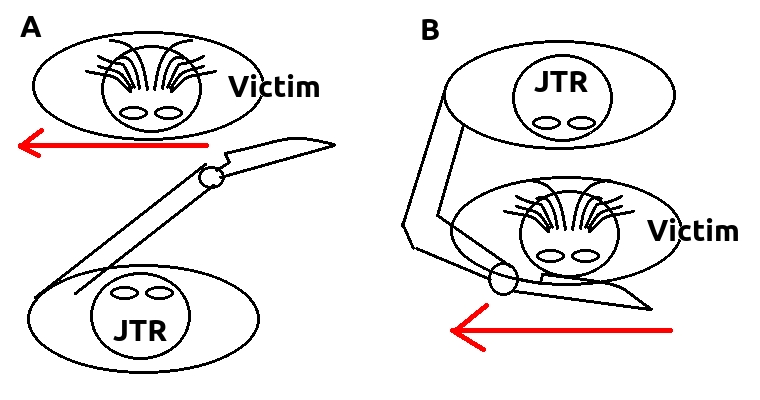 Get Out And Vote: Sixty hours until the polls close, as I write » « Name And Address: October 16 is International Pronouns Day