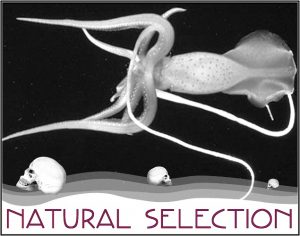 This is part 4 of “Natural Selection”, FtB’s Darwintine Festival story chain. If you enjoy being part of our community and appreciate the work we do here at FreethoughtBlogs, please consider making a donation to our legal defense fund.

For the next few hours, everyone scrambled about on their assigned duties, trying to get something, anything, concretely understood before the blizzard hit. For security, it was a constant struggle to keep the creature – which the security personnel had taken to referring to simply as ‘That Thing’ – contained, while the scientists took inconclusive samples and measurements and racked their brains about what to do. The cephalopod squirmed constantly and flailed its arms whenever they got loose. An observer from above would think Beagle Station was doing much the same as pressure mounted on its desperate people.

The only moment of levity was about an hour into taking samples, when Stavinsky was in the creature’s tent taking close-up photos of its skin, inching along its side. A duct opened, and Will Stokes had only enough time to hit the intercom and say “Robert! Don’t–” before a jet of horrible purple-black fluid shot out and coated Stavinsky head to toe… immediately after which the creature vocalized, “I’m so sorry.”

They couldn’t help but laugh, even as Stavinsky was swiftly bundled off to Decontamination.

The vocalization continued, though, as the creature repeated its strange apology message in English, then French, then Spanish, then Japanese.

Sheila Brach had been quietly watching all of this from a corner, taking notes. “I wonder.”

The others looked over at her. “We’ve all been thinking it. Why is it saying that? Does it understand? Dr. Gorman did speak a little bear…” She touched the intercom. “Do you speak human, cephalopod?”

A long tense moment passed. Nothing.

The scientists all released breaths they had been holding without realizing it and sagged, disappointed. They returned to their readings.

Suddenly: “What the hell is that!?”

Patricia looked over at Will. “What the hell is what?”

“I didn’t say anything,” Will replied.

A pause. As one, they turned to look at the monitors. That Thing had stopped squirming to get away.

“What the hell is that!?” it repeated, then “Shit! Shit shit shit!”

“Why is it swearing?” Sheila asked.

“Shit!” said the creature. “Shoo! Shoo! Go away!”, and it started squirming again, to no avail.

“Did that sound… familiar… to anyone else?” asked Patricia.

Will asked “Familiar how?”

Emily started nodding slowly. “Yes. Yes! It sounded a lot like-” Her fingers danced on the consoles, and after a few moments the ill-fated repairman’s bodycam footage played on one of the screens.

Silence in the monitoring room as the recording ended.

Emily broke the silence. “Identical. Down to the slight Midwestern drawl.”

“Damn. That means it’s just mimicking something it heard. Doesn’t know what the hell it’s saying,” Will said.

Sheila broke into a tiny grin. “Doesn’t it? Not directly, but… what if it does speak human, exactly the way Dr. Gorman speaks bear?”

“I don’t really-” Patricia began, but stopped at a gesture from Emily.

Emily cleared her throat and reached for the intercom. “‘What the hell is that!?'”

The creature on the screen immediately stopped struggling, and after a moment echoed, “What the hell is that!?”

Again silence for a moment. Then Will, thunderstruck, said, “Holy. Shit.”

“It’s like a parrot!” said Patricia, “It doesn’t understand our language on our terms, but maybe it understands something.”

Sheila nodded. “I bet it thinks that’s a greeting call… because that’s the first noise every human made when they saw it.”

“Damn,” said Will, “We still can’t talk to it. We don’t even know if it’s actually intelligent or not.”

“Or what ‘intelligent’ means for something as alien as it is.” Sheila agreed.

Sheila blinked. “I… well, not literally alien. Not extraterrestrial. As far as we know, anyway.”

Will chuckled. “Cephalopods are alien enough. Trust me on that.”

Patricia rubbed her face. “Okay. So… what do we do now? We’ve only got a couple of hours at best before the blizzard gets here.”

“We’ve made contact,” said Emily, “So now we need to find out what it wants, why it – or they – attacked Dawson Station. We need to communicate. We need someone with experience with animal mimics, like birds. Someone who can speak with another species, if even a little.”

All eyes turned to look at Dr. Patricia Gorman.

The Descent of Man: ASCEND. » « Philosophy Tube stole my name!