[I]n a move praised by The Satanic Verses novelist Salman Rushdie, who has thrown his weight behind PEN and Charlie Hebdo since the start of the controversy, Epstein has asked for her name to be removed from the petition.

“The 1st protester to admit she was completely wrong,” tweeted Rushdie on Sunday. “Respect to Jennifer Cody Epstein for doing the honourable thing & admitting she made a mistake about #CharlieHebdo. Will others follow her?” 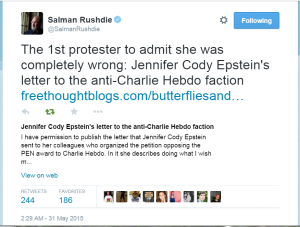 The Guardian again (Alison Flood is the reporter):

In a letter to her fellow signatories published in full by the writer Ophelia Benson on Free Thought Blogs, Epstein wrote that she was “misinformed and (quite frankly) wrong” when she made her decision to add her name to the list.

Flood quotes extensively from the letter, which is good – that’s why I was given permission to publish it: to get the word out. Salman helped with that!

So much more than beautiful women » « Guest post: Corporations stealing public domain music to copyright it