In Tunis today – guys with guns killed 19 people at the Bardo Museum.

Italian, Spanish, Polish and German citizens were among those killed, as well as a Tunisian and a police officer, PM Habib Essid said.

Security forces killed two gunmen and were searching for accomplices, he added.

The attack happened at the Bardo Museum in central Tunis.

At the time of the attack deputies in the neighbouring parliamentary building were discussing anti-terrorism legislation. Parliament was evacuated following the attack.

At least 22 tourists and two Tunisians were injured in the attack, Mr Essid said.

A museum, a museum of antiquities. 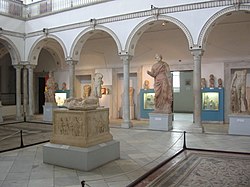 That attacks a lot of Forbiddens with one shoot-up, doesn’t it – history, education, images, beauty, internationalism, mutual exchange and understanding, mingling, travel, freedom of movement.

The Bardo museum, renowned for its collection of antiquities, is a major attraction in Tunis.

Tourism is a key sector of Tunisia’s economy, with large numbers of Europeans visiting the country’s resorts.

In 2002, 19 people, including 11 German tourists, were killed in a bomb blast at a synagogue in the resort of Djerba. Al-Qaeda said it had carried out that attack.

Religious fanatics hate all of that. They hate human beings, and our ways of being happy. No museums for you, no art, no jokes, no resorts, no antiquities, no Buddhas in earphones, no music, no dancing, no education outside The Holy Book, no recreational walks, no dogs, no reform, no change, no freedom to leave, no future, no joy, no hope.