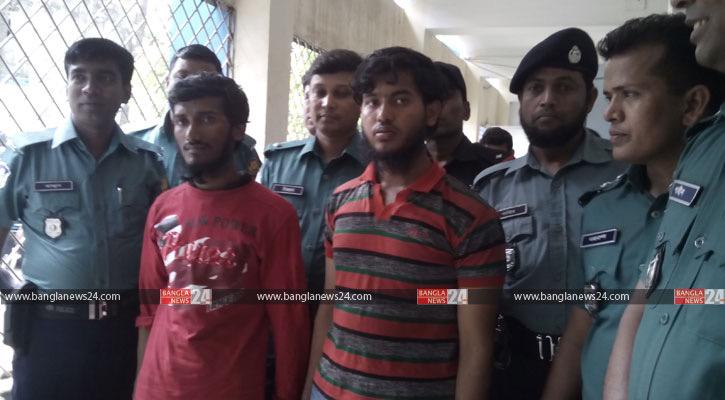 She also shared photos of Washikur Rahman’s hacked corpse. She wants everyone to know what that murderous violence looks like, so that we can imagine what it feels like.

Oh god no not again – another atheist blogger hacked to death by men with machetes in Dhaka.

Washikur Rahman, an atheist blogger, was hacked to death on a busy street in the centre of Dhaka on Monday morning, a police official said.

“Police on duty near the spot caught two attackers red-handed with three machetes as they were fleeing the scene after the incident,” police official Humayan Kabir told Reuters.

A fellow writer said Rahman wrote against religious fundamentalism on Facebook and across other social media sites using a pen name, although this could not be confirmed by police. The alias used by Rahman is said to be “Babu” (ugly duckling).

“He is a friend of mine and a fellow warrior. He was an atheist and a believer in humanism,” fellow blogger Asif Mohiuddin, who survived a brutal attack by Islamists in January 2013, told AFP via Facebook from Berlin.

This is horrifying. Nushin Arbabzadah says religious violence has become normalized in Afghanistan.

The brutal lynching of Farkhunda, has revealed a number of significant issues regarding the state of Islam in Afghanistan.

The most crucial is that a fanatic strand of Islamic has become normalized, and accepted by a mainstream audience. The imam who incited the violence, the mob who lynched Farkhunda, the bystanders who filmed it — they were not the disenfranchised. They were ordinary Afghans, members of the middle class, including shop keepers. The initial public reaction was approval, expressed by public figures representing the spheres of culture and education. END_OF_DOCUMENT_TOKEN_TO_BE_REPLACED

Mandy Brown comments on the ruling in Ellen Pao’s suit against Kleiner Perkins.

The law has been constructed in such a way that only extremely blatant discrimination counts. More subtle sexism (and racism) can hide behind all kinds of gender- or race-neutral justifications which can never be wholly dismissed. So Pao wasn’t passed up because she was a woman, but because she wasn’t likeable. She wasn’t fired because of her lawsuit, but because she didn’t have what it takes. She was both too pushy and not pushy enough. She wasn’t a “thought leader.” END_OF_DOCUMENT_TOKEN_TO_BE_REPLACED

The Daily Mirror talks to her.

The police came to her door and told her her mother was a jihadist.

In the seven years since the two last saw each other, her mother had become a pivotal member of Al Shabab, the Somali jihadists ­behind the Westgate mall ­massacre in Nairobi. END_OF_DOCUMENT_TOKEN_TO_BE_REPLACED

Nick Cohen reviews Nigel Farage’s campaign biography and finds yet another “get me I’m an outsider” phony.

Farage is an attack dog who poses as an underdog. He’s the small-minded man who pretends he’s the friend of the little guy. He writes as if he were a dissident in a dictatorship: a lone and persecuted voice, who has suffered for telling truth to power. The results are occasionally hilarious. The BBC and press are always out to get him, even though most of the Conservative press supports Ukip’s policies, and the BBC never has him off air.

They promote him, but they don’t cuddle and squeeze him.

Farage’s vainglorious anecdotes are accompanied by a long, low moan about how he could have made “an enormous amount of money” if he had not chosen to leave the City and enter politics. So relentless is the self-pity, so often does Farage play the victim card, that there are times when this book feels like the Home Counties equivalent of a martyrdom video.

What not to say about rape:

A Catholic priest in Melbourne has reportedly been criticised for a speech in which he said Jill Meagher would have been at home instead of out on the night she was raped and killed if she was more “faith filled”.

Meagher was murdered by Adrian Bayley after a night out Melbourne in September 2012. He was sentenced to life in prison.

The priest delivered his homily at an end-of-term service for a Catholic primary school in Melbourne on Friday and radio station 3AW reported he held up a newspaper article with a picture of Bayley on it to make his point. The report says he told a crowd of about 100 that if Meagher had been more “faith filled” she would have been home and “not walking down Sydney Road at 3am”.

Robert Reich thinks college fraternities should be abolished. I do too.

There are exceptions but for the most part fraternities are elitist, exclusive, and privileged. They have nothing to do with higher education. And they’re periodically mired in scandal involving hazing (such as the University of Wisconsin-Madison frat’s degrading hazing); racism (the video of Sigma Alpha Epsilon members calling for the lynching of African-Americans); sexual assault (the University of Maryland frat brothers’ pro-rape emails, and allegations of drug dealing and sexual assault in a North Carolina State frat); degradation of women (Penn State fraternity’s secret Facebook page for sharing photos of nude passed out women); destructive drunkenness (University of Michigan frat brothers destroying a ski resort in a drunken rage). The list goes on, and this is just in the last few months.

END_OF_DOCUMENT_TOKEN_TO_BE_REPLACED

Indiana is surprised and, frankly, a little hurt by all the hostility that has greeted its friendly new law inviting everyone to treat selected sets of people like pariahs.

Three days after signing legislation widely criticized as a “license to discriminate” against LGBT people, Indiana Gov. Mike Pence says he didn’t anticipate “the hostility that’s been directed at our state.” END_OF_DOCUMENT_TOKEN_TO_BE_REPLACED