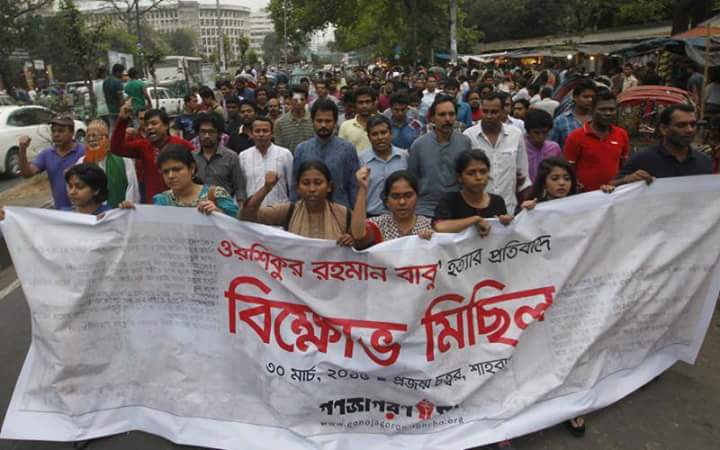 The Huffington Post has a video from a few days ago on “Muslim women” saying why Ayaan Hirsi Ali is all wrong about Islam. Quel shock. From the abstract:

Activist Ayaan Hirsi Ali has been extremely vocal in her critique of Islam. In her new book, Heretic: Why Islam Needs a Reformation Now, she details her issues with its teachings and even declares “Islam is not a religion of peace.”

*gasp* You don’t mean it! She even says Islam is not a religion of peace???! How can she possibly think such a thing, given all the peace spread by Islam right now? Think of those three peace-loving men who chopped Washiqur Rahman to death a few hours ago.

I get that people don’t want to pick on Muslims but let’s be reasonable, ok? Of course Islam is not a religion of peace.

An Indiana business owner went on the radio to say he’d gotten an early start on the discriminating against people even before the governor signed Indiana’s RFRA into law.

The business owner, who would not give his name or the name of his business, said he had told some LGBT “people” that equipment was broken in his restaurant and he couldn’t serve them even though it wasn’t and other people were already eating at the tables. “So, yes, I have discriminated,” he told RadioNOW 100.9 hosts. The hosts were surprised the owner said he was okay with discriminating.

“Well, I feel okay with it because it’s my place of business, I pay the rent, I’ve built it with all my money and my doing. It’s my place; I can do whatever I want with it,” he said. “They can have their lifestyle and do their own thing in their own place or with people that want to be with them.”

So he can keep out the Nigras and the Jews and the wetbacks and anyone else he doesn’t like, because this is god’s country.

Georgia. Nineteen other states, including nearby Kentucky and Illinois, have adopted religious liberty laws.

These laws try to codify some of what was established when the Supreme Court ruled in the Hobby Lobby case last year.

Let’s keep this up. Maybe soon we too can be talking about the latest atheist blogger who’s been murdered by fanatics wielding meat cleavers.

Originally a comment by themadtapper on As when you find a trout in the milk.

“It’s not about discriminating against gay customers, it’s about protecting religious liberty!”

Ok, so give me an example of what kind of scenario this law is supposed to help in.

“Well, maybe a florist doesn’t want to provide flowers for a gay wedding.”

So, the scenario in which this law, which totally isn’t about discrimination, is supposed to help in is a scenario where someone wants to turn away a gay customer? END_OF_DOCUMENT_TOKEN_TO_BE_REPLACED

Purvi Patel was arrested in 2013 after she went to the emergency room to seek medical treatment for heavy bleeding. After initially denying that she had been pregnant, she eventually told the staff that she had a premature delivery at home, believed the fetus was not alive, and placed it in a bag in a dumpster on her way to the hospital. Her doctors called the cops, who questioned Patel while she was still in the hospital, searched her cell phone records, and recovered the fetus.

Patel maintains that she did not abandon a living baby. “I assumed because the baby was dead there was nothing to do,” Patel later told law enforcement officials. “I’ve never been in this situation. I’ve never been pregnant before.” END_OF_DOCUMENT_TOKEN_TO_BE_REPLACED

Garrett Epps at the Atlantic explains how the Indiana RFRA is different from (and worse than) the Federal one and all but two state ones.

[T]he Indiana statute has two features the federal RFRA—and most state RFRAs—do not. First, the Indiana law explicitly allows any for-profit business to assert a right to “the free exercise of religion.” The federal RFRA doesn’t contain such language, and neither does any of the state RFRAs except South Carolina’s; in fact, Louisiana and Pennsylvania, explicitly exclude for-profit businesses from the protection of their RFRAs.

The new Indiana statute also contains this odd language: “A person whose exercise of religion has been substantially burdened, or is likely to be substantially burdened, by a violation of this chapter may assert the violation or impending violation as a claim or defense in a judicial or administrative proceeding, regardless of whether the state or any other governmental entity is a party to the proceeding.” (My italics.) Neither the federal RFRA, nor 18 of the 19 state statutes cited by the Post, says anything like this; only the Texas RFRA, passed in 1999, contains similar language.

END_OF_DOCUMENT_TOKEN_TO_BE_REPLACED

Hamza Tzortzis of 5pillars and gender segregation at university events fame tells men to “man up” and be Chivalrous toward the Ladies.

Whoever you are, wherever you are, and whatever you believe in, it is time we used that one gender difference that has not yet been disputed amongst our “feminist” and “liberal” sisters – your strength and physical appearance.

END_OF_DOCUMENT_TOKEN_TO_BE_REPLACED

The Guardian on the slaughter of Washiqur Rahman.

A blogger known for his atheist views has been stabbed to death in Bangladesh, in the latest of a series of attacks on independent writers in the developing south Asian nation.

END_OF_DOCUMENT_TOKEN_TO_BE_REPLACED

The IHEU on the brutal murder of Washiqur Rahman in Dhaka a few hours ago.

Washiqur Rahman’s Facebook banner declares “#IamAvijit”, after the leading secular and humanist blogger, Avijit Roy, who was murdered a month ago in Bangladesh.

END_OF_DOCUMENT_TOKEN_TO_BE_REPLACED

The BBC reports on the brutal murder of Washiqur Rahman.

Two students at an Islamic seminary have reportedly been arrested.

Last month, Avijit Roy, a US-based writer who had criticised religious intolerance, was killed in a machete attack while he was visiting Dhaka.

His death sparked fresh concerns for freedom of speech in Bangladesh, where several secular-minded writers have been targeted by militants.

Bangladesh is a death-trap for writers who promote religious tolerance and freethinking. END_OF_DOCUMENT_TOKEN_TO_BE_REPLACED