We saw yesterday that Jaclyn “stop all this divisiveness!!” Glenn is a fan or friend or both of The Amazing Atheist. 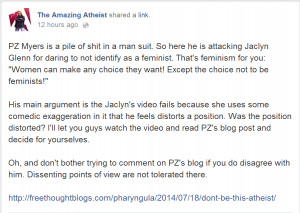 My knowledge of what exactly is horrible about the Amazing Atheist was a little rusty though (well there are so many misogynist ragers among the atheists) so I went looking for details. And found them.

RationalWiki has a useful entry.

As an example of his respect and care for his fellow humans, in his pompous and self-indulgent e-book Scumbag: Musings of a Subhuman (2007), Kincaid writes:[3]

Rape isn’t fatal. So imagine my indignation when I saw a chatroom called “Rape Survivors.” Is this supposed to impress me? Someone fucked you when you didn’t want to be fucked and you’re amazed that you survived? Unless he used a chainsaw instead of his dick, what’s the big deal? … The word survivor applies to people who are alive after being stabbed 73 times with an ice pick or mauled by rabid wolverines, not to a woman who gets dick when she doesn’t want it. Just because you got raped, you have to rape the English language? You vindictive bitch! Also, don’t you ever get tired of being the victim? How many failed relationships are you going to blame on a single violation of your personal space?

In the following section, Kincaid recalls a female acquaintance who rejected a guy for his small penis size. The anecdote culminates in Kincaid’s hilarious punchline:[4]

I told her, “You’re lucky it wasn’t me. I’d have busted your fucking nose and raped you.”

The “Sex” segment of the book closes with the chapter “Tits vs. Ass: The Final Showdown,” which features a helpful comparison chart of pros and cons, with such charming observations as tits being “hard to stare at without the girl noticing,” while “you can take a picture [of her ass] and she won’t be any the wiser.”[5]

And then there’s the “drown in rape semen” item.

On February 2012, in a thread on the MensRights subreddit about a disasteful username on a feminist board, he made a “joke” about how he wanted to violently rape one of its users. When he was informed the person in question was an actual rape victim and called out by said person for his abusive language and lack of respect for people with post-traumatic stress disorder, he complained about the very concept of trigger warnings and posted further graphic descriptions of how he would rape her again in a deliberate attempt to make her relive her trauma. Choice statements include “I will make you a rape victim if you don’t fuck off.” and “I think we should give the guy who raped you a medal. I hope you fucking drown in rape semen, you ugly, mean-spirited cow.”[1] Supposedly this was some sort of clever satire of… something.[17] This “Amazing” guy was taken to task by PZ Myers and others for his misogyny.[18][19] [20] He did eventually apologize, but refused to make it public because that would mean admitting that threatening to rape people on the internet is crossing a line.[21]

And Jaclyn “stop all this divisiveness!!” Glenn is a fan and perhaps friend of that guy. The Jaclyn Glenn whose anti-feminsm video Richard Dawkins called “brilliant” yesterday. Yeah I’m really going to take advice on how to be not divisive from that Jaclyn Glenn.