There was a sudden influx of first-time commenters, which puzzled me for a minute and then I realized Glenn must have responded (without contacting me directly, which I thought we were supposed to do, because she just said that…), so I looked at her Twitter and saw this: 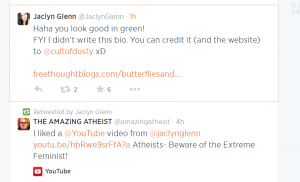 Haha you look good in green!
FYI I didn’t write this bio. You can credit it (and the website) to @cultofdusty xD

I’m not sure what the “Haha you look good in green!” means. Is it that I’m jealous? I dunno.

I’m not going to contact her directly to ask, though, because I don’t want to talk to her. She doesn’t interest me. I think the harm she is doing with her anti-feminist videos is worth talking about, but that doesn’t mean I think she herself is interesting, and I don’t.

She also responded (without contacting me directly) on Facebook. 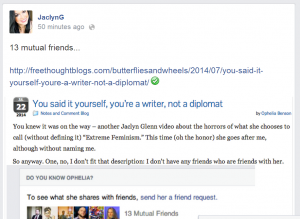 Even though I said I don’t have any friends who are friends with her.

Yes, that’s right. I didn’t mean Facebook friends, not all of whom are friends. I meant actual friends, who are actual friends with her. I’m sure if I wanted to contact her directly I could find someone who would share her email address. That wasn’t what I meant. No, I’m not going to ask one or another Facebook friend to help me contact Glenn. In any case that was only item one. Item two was much more important:

Two – what she argues there makes no sense. She put out her video in public, so why shouldn’t I or anyone write about it in public? Why on earth does she expect people to have a personal conversation with her first? I don’t know her, I don’t have any friends who know her that I’m aware of, I don’t have connections with her, I don’t have a history of talking to her – why would I try to talk to her before I write about a YouTube video of hers? She has two hundred thousandsubscribers – that’s the population of a small city. Why would I have to ask her what she meant in her video when her video is already out there? What is made public is what is made public; it doesn’t matter what the intentions were, what matters is what is made public. If she didn’t make herself clear, she can make another video to make herself clear, but it’s not my job or any critic’s job to interview her before criticizing her video. She didn’t interview me before bashing feminism, did she.

The Girl Summit » « In the world