I have roused the furious slap-fighting anger of the HBD crowd, that’s for sure. They have now come up with a priceless argument to refute everything I’ve said, and are accusing me of being a creationist.

This image is priceless. Yes, @pzmyers, by definition, is a creationist. Why does PZ hate Darwin so?

This must be a doozy of a refutation, encapsulated in a single image. And here it is. 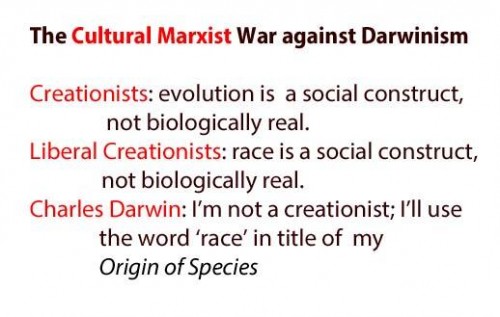 The Cultural Marxist War against Darwinism

Creationists: evolution is a social construct, not biologically real.

Liberal Creationists: race is a social construct, not biologically real.

Charles Darwin: I’m not a creationist: I’ll use the word ‘race’ in title of my Origin of Species

You might have seen an earlier version of this argument in the comments here, but that was before they ran out and got the juicy quote from Charles Darwin.

I confess, the first thing that had me confoozled was that term “Cultural Marxist”. I had to scurry over to Wikipedia to look it up, I’m embarrassed to say. Here’s the definition:

Cultural Marxism refers to a school or offshoot of Marxism that conceives of culture as central to the legitimation of oppression, in addition to the economic factors that Karl Marx emphasized. An outgrowth of Western Marxism (especially from Antonio Gramsci and the Frankfurt School) and finding popularity in the 1960s as cultural studies, cultural Marxism argues that what appear as traditional cultural phenomena intrinsic to Western society, for instance the drive for individual acquisition associated with capitalism, nationalism, the nuclear family, gender roles, race and other forms of cultural identity; are historically recent developments that help to justify and maintain hierarchy. Cultural Marxists use Marxist methods (historical research, the identification of economic interest, the study of the mutually conditioning relations between parts of a social order) to try to understand the complexity of power in contemporary society and to make it possible to criticise what, cultural Marxists propose, appears natural but is in fact ideological.

Oh. Hey. I am sympatico with most of that (I’d disagree with the arrow of causality implied in that phrase “to justify and maintain hierarchy”, but this is just a synopsis so maybe the reality is more sophisticated than that). I guess I am a Cultural Marxist then, in the sense that I oppose the appropriation and distortion of natural processes to justify ideological ends.

You learn something every day.

Of course, I don’t think my critics use the term in that rational sense. They are using it as a conservative insult.

In current political rhetoric, the term has come into use by some social conservatives, such as historian William S. Lind, who associate it with a set of principles that they claim are in simple contradiction with traditional values of Western society and the Christian religion. In this usage, political correctness and multiculturalism, which are identified with cultural Marxism, are argued to have their true origin in a Marxian movement to undermine or abnegate such traditional values.

I have to go along with that, too: fuck Western tradition and religion.

And then, conveniently, the racist wackos have lately been sending me a link to their favorite definitions. Here’s one from a site called Destroy Cultural Marxism.

Now that’s more like it. That’s the attitude I get from these loons: that I’m a race traitor because I recognize the humanity of people who are not white, and think our society perpetuates racist myths that require active opposition. It’s also a load of nonsense. I don’t tell white people that they should marry black people, or any other color-matching bullshit: I think people should be free to marry whoever they love.

That site also has some other charming definitions that I never wanted to know, but are very revealing.

Genophilia:  The love of one’s own race. A natural instinct that Cultural Marxists want to deny (at least for whites).

Identitarian Religion:  An older form of religion that stresses ancestral obligations.  Adamantly opposed by Christian Cultural Marxists (at least for whites). Throughout nearly all human history, identitarian religion (aka, ethno-religion), has been the norm.

Nation:  The very word ‘nation’ (from Latin ‘nasci’) implies link by blood.  The traditional (non-Marxist) understanding of nation implies racial homogeneity.  (Until very recently Europe has always been racially homogenous and USA, in 1960 census, was 90% white.)

It’s true. I don’t love my own race. I love people, though, and I don’t see any reason to exclude the majority of humanity from my circle of friends simply because of their ancestry, nor do I think it’s a good thing to start slicing up countries into tinier fragments of pure ethnicities, bolstered by a racist religion. And what are these people going to do in a few decades, when the USA is less than 50% white? Leave and go back to their racial homeland? Which is where?

As for their bogus syllogism that tries to equate denying that something is biologically real with being a creationist, some things aren’t biologically real — there are no fairies, unicorns, or winged monkeys. Stating that they don’t exist does not make one a creationist. There are differences between individuals that are genetic, and therefore the distribution of individuals carrying them fall into clades, but that does not imply that all of humanity cleaves naturally into a small number of discrete groups. That is a recipe for hate, as well as being biologically invalid. Which, I guess, makes the Human Biodiversity phonies all a bunch of creationists, by their own reasoning.

Also, bad news: Darwin was a racist. He carried a great many of the prejudices of a typical Victorian gentleman, and they come through in his writings; but at least they were softened by his humanism, and he aspired to be more egalitarian. But you don’t get to call St. Chuck your perfect ideal. He was flawed. And the theory does not rely on the perfection of one of its discoverers.

Holly Dunsworth also has a relevant quote from Darwin’s The Descent of Man.

Man has been studied more carefully than any other organic being, and yet there is the greatest possible diversity amongst capable judges whether he should be classified as a single species or race, or as two (Virey), as three (Jacquinot), as four (Kant), five (Blumenbach), six (Buffon), seven (Hunter), eight (Agassiz), eleven (Pickering), fifteen (Bory St. Vincent), sixteen (Desmoulins), twenty-two (Morton), sixty (Crawford), or as sixty-three, according to Burke.

I’ll add to that this quote:

Although the existing races of man differ in many respects, as in colour, hair, shape of skull, proportions of the body, &c., yet if their whole structure be taken into consideration they are found to resemble each other closely in a multitude of points. Many of these are of so unimportant or of so singular a nature, that it is extremely improbable that they should have been independently acquired by aboriginally distinct species or races. The same remark holds good with equal or greater force with respect to the numerous points of mental similarity between the most distinct races of man. The American aborigines, Negroes and Europeans are as different from each other in mind as any three races that can be named; yet I was incessantly struck, whilst living with the Fuegians on board the “Beagle,” with the many little traits of character, shewing how similar their minds were to ours; and so it was with a full-blooded negro with whom I happened once to be intimate.

Darwin isn’t your friend, HBD racists, and even if he were, it would be an element of his character to deplore, not reason to accept race hatred as a necessary component of evolutionary thought.

Friday Cephalopod: Octopus got the moves » « Think about why it was trending