You may think The New Misogyny (as, I’m told, David Futrelle calls it) and the harassment and threats and sometimes plain old violence that go with it are a problem, but there are those who think the problem is instead noticing the link between misogyny and harassment—>violence. 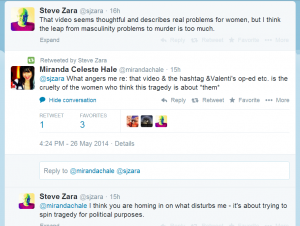 That video seems thoughtful and describes real problems for women, but I think the leap from masculinity problems to murder is too much.

@sjzara What angers me re: that video & the hashtag &Valenti’s op-ed etc. is the cruelty of the women who think this tragedy is about *them*

I think you are homing in on what disturbs me – it’s about trying to spin tragedy for political purposes. 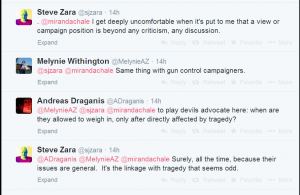 . @mirandachale I get deeply uncomfortable when it’s put to me that a view or campaign position is beyond any criticism, any discussion.

@MelynieAZ@sjzara@mirandachale to play devils advocate here: when are they allowed to weigh in, only after directly affected by tragedy?

@ADraganis@MelynieAZ@mirandachale Surely, all the time, because their issues are general. It’s the linkage with tragedy that seems odd.

So what is happening here is that women or feminists are “trying to spin tragedy for political purposes.” So Rodger’s murder-spree was a simple tragedy, it was in no way political, and it’s bad, suspect “spin” to view it as political.

I think when somebody makes a video announcing a plan to murder and reasons for the murder, and then commits the promised murder(s), we’re allowed to take that announcement at face value.

We do that when jihadists make pre-murder videos, I think.

Or take the bombing of the 16th Street Baptist Church in Birmingham, Alabama, in 1963. Would a Steve Zara frown in concern at people who “spin” that particular “tragedy” as political? Would a Miranda Hale express anger at the “cruelty” of the black people who think this tragedy was “about *them*”? I hardly think so.

Why is it different?

Same? Or different? » « Oh gawd no not Leonard Shlain