Ok this is funny. Edwina Rogers is the new Executive Director of the RDF, and the RDF interviewed her for its Secular VIP of Week. So who made that decision? Was it the exec – oh wait. Couldn’t have been.

What if you allied the biggest secular groups in the United States and placed their political goals in the hands of someone who’s worked in the White House? And again in the White House, and for four US senators? This week we interview our very own Edwina Rogers, Executive Director of the Richard Dawkins Foundation, in her other role as head of the Secular Coalition for America.

Good idea! Then next week you can interview Richard Dawkins in his other role as head of All the Atheism. Then the week after that Edwina Rogers and Richard Dawkins can have a dialogue about what it’s like to be the head of everything.

RDF: You run both the Richard Dawkins Foundation and the Secular Coalition for America. Where do you get your energy?

Edwina Rogers: Well, I’m happy to do it.  At the Secular Coalition for America our mission is to facilitate coordination for all secular groups, to unify the movement.   We are perfectly placed to provide back-up office support for any of the non-theist groups.

Why are you so fabulous?

Just born that way I guess.

What made you so glorious?

I can’t explain it.

Where is anyone as fine as you?

No no, for real now:

RDF: I heard you brought Richard Dawkins to Congress.  How did that go?

Edwina Rogers: We were very fortunate to have Richard Dawkins and Stephen Pinker offer a briefing for the House Staff and for the Senate Staff.  Richard did meetings with several members of the Science and Technology Committee, and answered any questions they had about science and gave advice.  It went very well.  A lot of the members knew who Richard was, or their children were big fans.  Some of them brought in books to be signed.

Want your secular group or leader to be picked as Secular VIP of the Week and featured to Richard’s 1.7 million followers? Email johnny@richarddawkins.net.

It’s gone to his head. Badly. 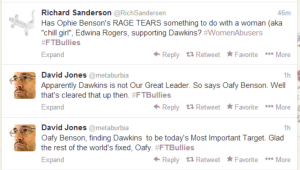 Dawkins sure does have classy fan boys.

Figures of speech » « It’s a matter of priorities, Barmaid