Things get more interesting every day.

BBC Newsnight talked about the Twitter harassment tonight (that is, two and a half hours ago). Paul Mason wrote a related article about it. It traced the harassment back to none other than Rebecca’s “guys, don’t do that” video, and showed a bit of said video. Then it talked to oolon about the block bot.

Since I’ve been on the trail of the people threatening high-profile women with rape on Twitter I’ve learned a lot. I get a fair amount of grief on social media, usually from the kind of people who get driven to using the F-word about Keynesianism, or the Laffer curve.

Now my timeline’s been flooded with abuse – and its alter ego, gentle condescension laden with malice – from all kinds of trolls, griefers and flamers (the latter, one of the trolls explained, are not serious, adding that it is they, the trolls, who are the kings when it comes to ruining people’s lives online).

Proposed solutions range from forcing Twitter to suspend the account of anybody reported for threats or violent abuse, to forcing all users to sign up with a verifiable e-mail address. But who are the “trolls” and can anything be done to stop them?

He talked to a technical person who thinks blocking is all one can do.

Since I did this report I’ve been flamed by a particular community. I put it to Ms Norton that if I sanitise my own experience by blocking individuals and – unlike with Stella Creasy MP or Caroline Criado-Perez – they do go away, this
just leaves me trapped in a sanitised reality while a “dirty” reality goes on around me.

She says “Throwing that ‘dirty’ conversation off Twitter doesn’t end it. And actually knowing where it is, I think that’s helpful. I thinking knowing that those dirty conversations are out there, that we can choose to engage with them or choose to ignore them depending on the time and energy and motivations that we have.”

If it’s a social problem and not a technological one, what is the root of it? Ms Norton, believes it is stark:

“The social problem is that men are raised to hate women and technology is not going to fix that. What’s going to fix that is a societal conversation about why that is and why it shouldn’t be, and why women aren’t a threat to men. And the technology gives us the opportunity to have that conversation. It’s not always a pleasant conversation, but we need to have it. Just shutting down the voices we don’t like doesn’t make the sentiments go away.”

I don’t think so. I think having extra places and ways to have the “conversation” just makes that way of seeing women more entrenched and more feverish. I think shutting it down on various media would help.

Personally, as I get enough great conversations from the people who are prepared to debate ideas without abuse, I’ve resorted to the “shared block list” strategy. This focuses the wisdom of the Twitter crowd onto the most notorious idiots and enables those who sign up to engage in a collective block, without necessarily banning the perpetrators from the internet.

I’ve installed The Block Bot and I’ll be talking to the man who coded it tonight about the strange online community that revels in the belittling of women. Though I’ve been aware of trolls, sexism and the flaming of fellow women journalists for years now, what this has taught me is that violent misogyny is probably the defining fault line of the internet, and is what has a better chance of killing the social media than Ayatollah Khamenei and Kim Jong-un ever could.

You can already feel cyberspace divided into a world that hates women and one that does not. Fortunately the former is small, but incredibly powerful – and underestimated at its peril.

And that man is our very own oolon – whom I used to rebuke for his frivolity about the whole thing, but he (obviously) took it more seriously as time went on.

Toby Young was also on Newsnight. He boasted about having tweeted about an MP’s cleavage. The guy is a complete asshole.

A sock puppet commenter pointed out that Jeremy Stangroom is talking about suing oolon for defamation. It’s true. 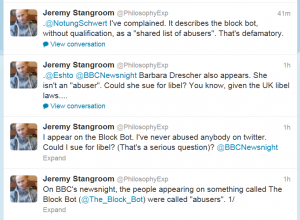