The bill passed the Republican-controlled Senate just before midnight, two weeks after the Legislature failed to put the restrictions to a successful vote in its first special session. The bill would ban most abortions past 20 weeks of pregnancy, place new requirements on which facilities could perform the procedures, and limit a woman’s ability to induce an abortion by taking a pill.

Abortion rights advocates, including Planned Parenthood of Texas, have said that the new law would effectively shut down all but six of the facilities where abortions are performed in the state.

The usual sentimental bullshit was talked about the fetus.

Gov. Rick Perry had made passing House Bill 2 a priority and said he will sign it into law.

In a statement after the bill passed, Perry said: This legislation builds on the strong and unwavering commitment we have made to defend life and protect women’s health. I am proud of our lawmakers, and citizens who tirelessly defended our smallest and most vulnerable Texans and future Texans.”

They’re not small vulnerable Texans, they’re developing fetuses inside the bodies of other people.

They’ve been busy, the haters of abortion rights.

Texas is only one of several states looking to tighten rules for abortions.

Missouri’s governor Friday let a bill become law without his signature that requires doctors to be in the room for the initial dose of a drug used in medication abortions.

Wisconsin’s governor signed into law last week a measure similar to Texas’ that forces abortion doctors to have admitting privileges at nearby hospitals. That law was blocked by a federal judge.

Fox News talking head Erick Erickson has been gloating and jeering, in particular by telling liberals to stock up on coat hangers. Yes really.

The Texas legislation, which was previously stalled by a filibuster on the Senate floor, would ban abortions after 20 weeks of pregnancy, mandate new regulations that would force all but five of the 47 clinics providing abortions in the state to close, and require doctors who perform abortions to have admittance privileges at a local hospital. Texas medical associations have expressed opposition to the bill, saying that is “not based on sound science” and “does not promote women’s health.”

During Senate debate over the bill, opponents of the legislation appeared on the floor carrying coat hangers, warning that some women without the option of legal abortion would resort to back-alley methods. “Do you want to return back to the coat hanger or do you want to be able to give them the option to be able to terminate their pregnancy because they have been raped?” said state representative Senfronia Thompson.

In response to the Texas Senate’s passage of the bill, Erickson wrote on Twitter: 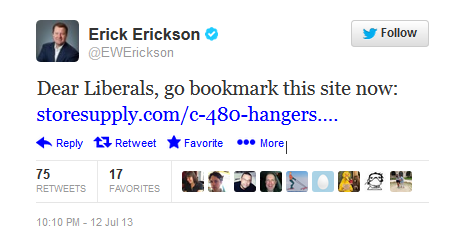 The end is sharp not tapered » « The real agenda