And Vacula is still working overtime displaying his bullying skillz to an admiring world. 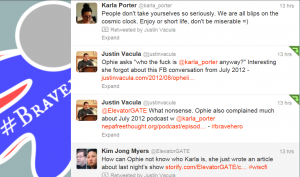 People don’t take yourselves so seriously. We are all blips on the cosmic clock. Enjoy or short life, don’t be miserable =)

Ophie asks “who the fuck is @karla_porter anyway?” Interesting she forgot about this FB conversation from July 2012 – http://www.justinvacula.com/2012/08/ophelia-bensons-continuing-complaining.html …

@daiapmorgen @justinvacula @karla_porter Notice that I don’t talk about “Justy” and “Karlie”? No sense of humor, I suppose.

@OpheliaBenson @TonySidaway You know that broadcasting what you dont like to be called may inspire people to call you it? It shows weakeness

Those ones about “who is Karla Porter” – I didn’t mean I thought I’d never seen the name before, I meant who the fuck is she, what does any of this have to do with her, why is she helping Vacula harass me, why is she caling me “Ophie” in that matey-contemptuous way, who is she.

But since she is harassing me alongside Vacula, I’ll point out what a thug she is. It’s my impression that she has some kind of responsible adult job – yet she spends time jeering at a total stranger on social media and in podcasts, and even contemptuously calls her by a diminutive, just to belittle. How very odd.

Anyway, Vacula’s last item is a real gem. Spoken like a true bully. 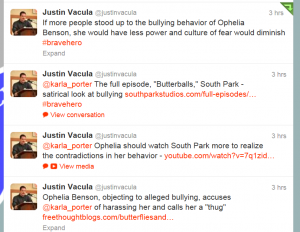