Another big win for religion.

At least three people in London with HIV have died after they stopped taking life saving drugs on the advice of their Evangelical Christian pastors.

The women died after attending churches in London where they were encouraged to stop taking the antiretroviral drugs in the belief that God would heal them, their friends and a leading HIV doctor said.

“This is happening through a number of churches. We’re hearing about more
cases of this,” AHPN chief Francis Kaikumba said.

AHPN said it believed the Synagogue Church Of All Nations (SCOAN), which has UK headquarters in Southwark, south London, may be one of those involved in such practices.

The church is headed by Pastor T B Joshua, Nigeria’s third richest clergyman,
according to a recent Forbes richlist.

Ohhhhhh those Nigerian clergy…what a lot of damage they do. Helen Ukpabio and now this guy. 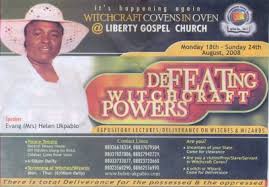 When approached by BBC London, leaders of the church described themselves as Evangelical Christian pastors.

The church’s website, which was set up in Lagos, Nigeria, shows photos of
people the church claims have been “cured” of HIV through prayer.

In one example, the church’s website claims: “Mrs Badmus proudly displays her two different medical records confirming she is 100% free from HIV-Aids
following the prayer of Pastor T B Joshua.”

“HIV-Aids healing” is listed on the church’s website among “miracles” it says
it can perform.

Compassion is at the heart of every great religion.