Within hours of my parents arriving in Seattle, my parents witnessed a pimp making a deal with a john by shouting a phone number and instructions out of his car while stuck in traffic on Broadway on Capitol Hill.
Me: …I swear that’s the first time I’ve seen that happen.

What else will they see on their adventure out of the Midwest? No one knows! Hopefully not any homeless people’s genitalia!

In case you ever wondered where I get it from.

Here’s his reaction to finding out the city council where he and my mom live are praying to Jesus:

It has come to my attention that the Constitution is being threatened in Lady Lake, Florida. For you who have never heard of Lady Lake, it is part of a retirement development known as The Villages. The average inhabitant is about 70+ years old. It’s a great place if you love golf and living an active lifestyle. However, it should be no surprise that it’s prime tea-bag party area. The local newspaper’s favorite columnist is Ollie North, a convicted felon. It also should come as no surprise that the local city council starts every meeting with a secular prayer. The city council says its’ prayer is not meant to favor any one religion, in spite of the fact that they usually end with, “in Jesus’ name we pray”. They also claim they are doing nothing illegal, since the meeting doesn’t officially start until the prayer is completed.

Although I am not surprised by this development, since most of the residences are gun nuts, religious zealots, and war mongers, but I have found that there are also some sane people. I play tennis with a group of guys who are surprisingly liberal. Recently, they asked my opinion on Huckabee for President, and I issued a disclaimer that I was an atheist and I considered all right wing religious politicians as the vanguard for the American Taliban. Instead of stoning me, they wanted to know more about my opinions. I told them, When I am King, people will be able to express their religious beliefs freely in church and their home, but will have to keep their mouth zipped in public. There will be no tax deductions for churches and you will no longer be able to run for office claiming God told you to do it. Everyone knows there is only one god — The Golf God — and he has plenty of bad golf swings in The Villages to keep him/her busy without taking on politics.

I’m becoming convinced that snark is a heritable trait. Quick, someone do a genetic analysis!

Did you know your city council is unconstitutionally supporting Jebus and wasting taxpayer’s time with prayer? I know how much you like writing letters to the editor – now may be a good time.

At the very least, Bill Calhoun may be a godless golfing buddy for you. Well, that’s assuming everyone in Lady Lake, FL golfs, which is a pretty fair assumption.

Weird when these things hit close to home.

Me: *hits drive on 18th hole, pushes it a little to the right* Uh oh, I’m almost in someone’s yard.
Dad: You’ll like the sign in their yard.
Me: *drives up*
Sign: Jesus is the Reason for the Season
Me: Ha! Darn, I missed.

After my approach shot, I proceeded to shank my chip, and then because I was laughing so hard, I whiffed my mulligan chip. To put that in perspective, I haven’t whiffed since I was little, and ended up shooting an 87. Not bad for not playing in 4 months and using someone else’s clubs (which were too short and too light for me), but I think God was still punishing me for mocking his gaudy Christmas sign.

Oh well. Shot an 84 today, so God must not care too much.

I’m registered to vote in Washington! Now I just need to figure out what crazies I need to avoid before filling in the bubbles.

As my dad always says, “If you didn’t vote, you have no right to bitch.” And what’s a blogger good for if they can’t bitch? ;)

(Also, it seems sort of wrong that I can link to my dad’s blog instead of just quoting his witticisms. What have I done?!) 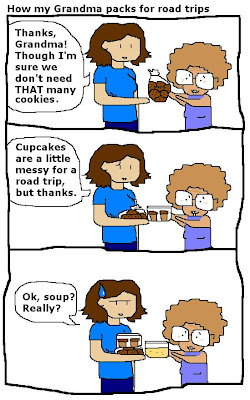 I’m going to assume this is a universal Grandma trait, not something limited to Greek Grandmas. As much as I do love her avgolemono soup, not so easy to eat in the car…

Anyway, thanks, Yia yia! Now back to packing!

…I helped my dad set up a blog. It was sort of inevitable, really. One, he’s retired – what else does he have to do? And two, he’s opinionated – I know it’s hard to believe, but McCreights tend to be. What more do you need to blog? At least he’s better with computers than most 64 year olds.

Knowing his interests, it’ll probably mostly be about politics, with a touch of sports and a dash of religion. And he’s calling it If I Were King, based on the phrase that prefaces most of his advice on how to fix the world. Imagine if Shit My Dad Says was now dictator. It’s amusing and a tad bit scary, no? He’s already fixed church, men’s ugly feet, congressional term limits, Tiger Woods, instant reply, and competitive eating.

I think one of the main reason he started it was to have a place where he could publicly poke fun at Teabaggers. And have a place where people actually listen, which is not necessarily true at the dinner table with me and my mom.

So go check it out and say hello! Be gentle, he’s not used to this whole blogging thing. But don’t be too nice – I don’t want this to go to his head or something. I’m not sure if the internet is big enough for two McCreight bloggers…

Mom: What do you imagine your wedding being like?
Me: …I kind of need someone to get married to first.
Mom: No, I mean, what would your dream wedding be like?
Me: I don’t really fantasize about my wedding. I don’t know, cheap.
Dad: Good, I raised you right. Now you won’t be the type who gets married too early just because you’re in love with the idea of getting married.
Mom: *disappointed look*
Me: I guess if I had an infinite amount of money, I would chose a really cool place to have it in. Like in a Natural History Museum.
Mom: …With dinosaurs and mummies and stuff?
Me: Yeah! I mean, how cool would that be, to get married under a giant fossilized skeleton of an ancient whale or something?
Mom: *look of horror and disgust*
Me: …Well I think it would be cool *pout*

I’ve learned to dread questions starting with that statement, especially from my mother. Apparently getting my bachelor’s degree in genetics and evolution makes me the Leading Expert on anything having to do with biology. For example, over the last couple of days I have fielded questions on:

I’m not sure which type of questions exasperate me more: Medical Questions or Extraordinarily Specific Questions About One Particular Species that Only a Researcher Who Has Studied That Species Would Know. I think it’s partly annoying because I’d love to answer questions about things I actually know. Whenever my parents do ask me questions about genetics, I get all giddy and love explaining it to them. But biologist does not equal doctor. And once I actually am Dr. McCreight, I think this will get even worse.

I just need to train my mom to say “You’re a geneticist” before her questions. That way she’ll be able to see how silly it is asking me about mating habits in ducks.

To all my engineering and computer science friends – I apologize every time I’ve come to you asking you stupid questions about Microsoft Word or my phone. …Though I’ll probably keep doing it. Consider this a preemptive apology.