Me: *explains different ludicrous things I saw at the Creation Museum*
Mom: …That doesn’t make any sense! What did all of the animals eat after the flood since everything else was killed? How did plants survive the flood? How did the Ark not sink? How did all of the animals on earth fit on a single boat?!?
Me: God did it. It was a miracle.
Mom: But…that doesn’t make any sense. What about the fact that man wrote the Bible?
Me: Oh, well it was inspired by God.
Mom: But how do they know that?
Me: Because the Bible says so. (At this point, I’m relishing in hearing my woo-filled mother bring up so many good arguments all of her own. And then it turns sour.)
Mom: I don’t see why they have to be so literal. I mean, I believe that there’s something bigger out there, and in spirits and ghosts and stuff, but what they believe is just silly.
Me: …Well, do you believe in unicorns? Why you don’t believe in them is the same reason why I don’t believe in ghosts or God.
Mom: Well I don’t know, maybe there were unicorns back with the ancient Greeks or something…
Me: …*facepalm* This thought experiment is lost on you.
Mom: Well, that’s the whole thing about religion, you need to have faith!
Me: Faith is believing in something which you have no reason to believe.
Mom: So?
Dad: I need evidence. Faith doesn’t make atomic clocks work.
Mom: Well, it makes me happy to believe in it, so there.
Dad: Just because it makes you happy doesn’t mean it’s true.

In case that last post got you down, go take a peek at Hemant’s post for an embarrassing (and delicious) baby photo of me. I actually asked my mom to go find a baby photo of me dressed as food. She was a tad bit confused.

I swear I was probably only 2 years old in that photo – I was a ginormous child. To put that in perspective, I was 5’9″ at age 10 (have only grown an inch since) and in my kindergarten class photo I was taller than the teacher. She was pretty short, but…yeah.

Next was the Ark room. To be completely honest, I don’t have a ton to say about it. The story of Noah’s Ark was probably the first Biblical story I learned, so the ludicrous things presenting here weren’t so shocking since I had heard them all already. I mean, we all know due to size and construction method the Ark would have sank in a couple of days, if it made it that long at all. Part of the room was made to look like part of the Ark, and guys were sitting around talking about how crazy Noah is in super stereotypical Jewish accents: 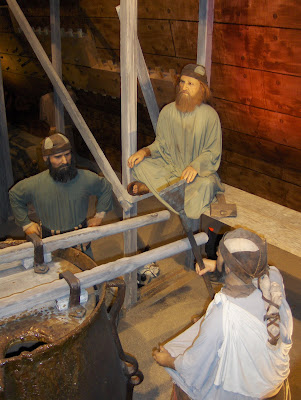 I also have to point out that this is where I found the single black mannequin in the entire museum, and he’s ostracized and drinking out of a flask: 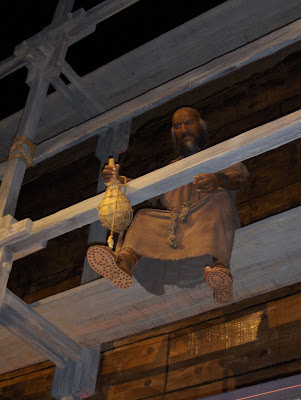 An astute museum goer pointed out that some of the mannequins seemed to be borrowed from a Discount Fake Celebrity store. For example, here we have Kiera Knightley weaving away: 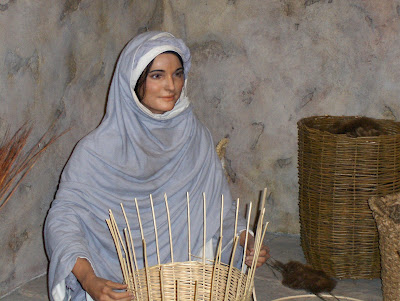 With her friend Angelina Jolie: 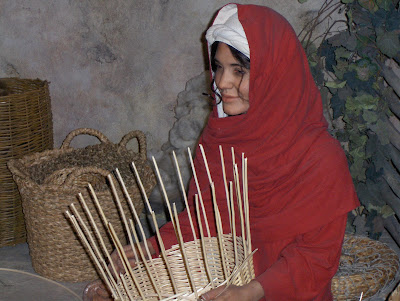 I also found this sign particularly funny, and tweeted it with the comment of “That’s what she said”: 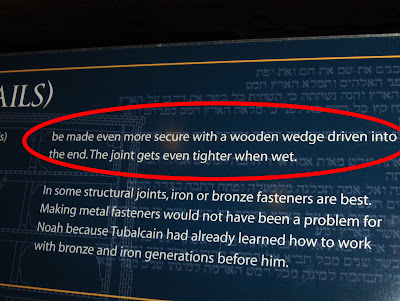 To which Hemant (who was apparently further back in the museum) replied “No, that’s what she said” with this photo.

And in case you didn’t notice, by this part of the museum I was going a little insane.

The next room was full of disturbing miniatures of what happened when the flood began. There were a bunch of tiny humans trying to make animal sacrifices, or running in fear, or clinging to rocks, or being swept away by waves. Like I said, very family friendly. There was a funny one where they explained that Noah’s family fed themselves by growing a small garden deep within the boat. In the dark. Again with the photosynthesis fail – I’m pretty sure they didn’t have heat lamps back then and that a couple of candles aren’t going to be enough. Oh, and let’s not forget the diorama of dinosaurs getting on the Ark too: 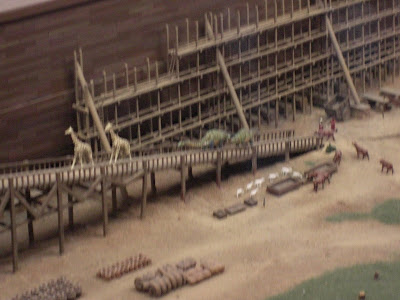 This room also had what I think (may have missed others) was the only interactive exhibit in the museum. It was just some computer screens with a simple jigsaw puzzle you could put together, and a couple of real life puzzles. That’s it. This is one part where you can tell this really is more of a theme park than a museum (well, other than all the mind numbingly stupid inaccuracies and lies, of course). You’re not supposed to interact or ask questions, you’re supposed to just accept what you’re being told. God did it, the end. Yet another reason to be terrified that small children are learning this – not only are their minds being filled with rot, but they’re not encouraged to question anything at all.

And since we haven’t had anything extraordinarily stupid yet, here you go: 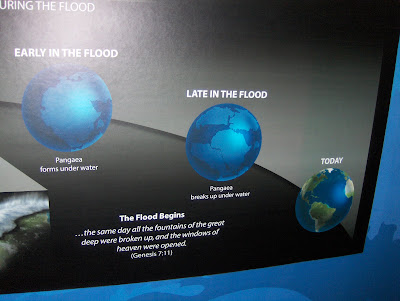 Yes, you read that right. They believe that the earth had a different set of continents before the flood, that the flood was so disruptive that everything moved around and that Pangaea formed under water, and by the time the flood ended Pangaea had already broken up and formed our modern continents.

WHAT?!?! Why do they even bother saying this?! They outright deny so many other facts, why even bother claiming that Pangaea existed at all? How is the theory of plate tectonics (which they bastardized by saying the flood moved everything) necessary to somewhat include, but we can just say evolution never happened at all?!?! This is where all of my coherent mental thoughts were replaced by repeated screaming. I was just trying to keep it mental and not actually start yelling at the exhibits.

Then I saw signs talking about evolution, and I knew it was about to get much, much worse.

(Thanks to Vanessa and Josh for extra photos)

First my Dad friends me. Then my Mom’s like, “Wait, why did you friend your Dad and not me? Friend me too!” Then I think my Prof/Boss friends me so I accept his request, only to find out his friendship was merely suggested to me by a coworker, so in actuality I sent him a friend request. Then a minute ago I get a friend request from a cousin who is Republican, Christian, and a fan of Fox News and Sarah Palin.

It’s a bit ironic because she comments on how the McCreights are bad at keeping touch and it would be a great way to get to know each other, but I have a hunch she would be appalled at most of the stuff on my facebook page. It really doesn’t surprise me though. I mean, she’s right, my dad’s side of the family doesn’t keep in touch at all, even though I have much more relatives there compared to my mom’s side (which is unusual for Greeks…). But the one thing I know is that something went horrendously wrong politics wise in my family: 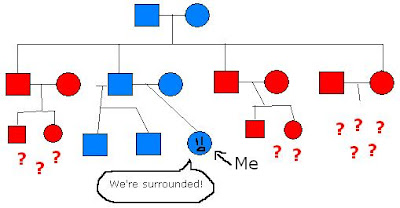 Seriously, how do two working class Democrats produce 1 Democrat (my dad) and 3 Republicans?* What went horribly wrong?!? Maybe this is the reason why we don’t keep in touch…

*The question marks are there because I seriously have no idea how many cousins or second cousins or probably third cousins (I’m the youngest cousin of the bunch) that I even have, especially because it seems like everyone has been remaried at least once or twice. The ones shown are just the ones I know the names of.** And my brothers didn’t arise by parthenogenesis, they just have a different mother that I was too lazy to draw.
**Actually, it’s kind of sad. I’ve done some genealogy stuff and I have an accurate family tree for the McCreights back to the 1700s (and for other branches back to the 1500s) yet I don’t know my modern relatives.