In early April Animal Crossing: New Horizons celebrated Bunny Day, a secular analogue to Easter. During this event, pastel-colored eggs could be found everywhere, and could be used to craft colored-egg-themed furniture and clothing. This was not entirely well-received by fans, because the eggs would replace other ordinary crafting items, and because the furniture is ugly.

For my part, I crafted every single Bunny Day item, and stuffed them all in a room. 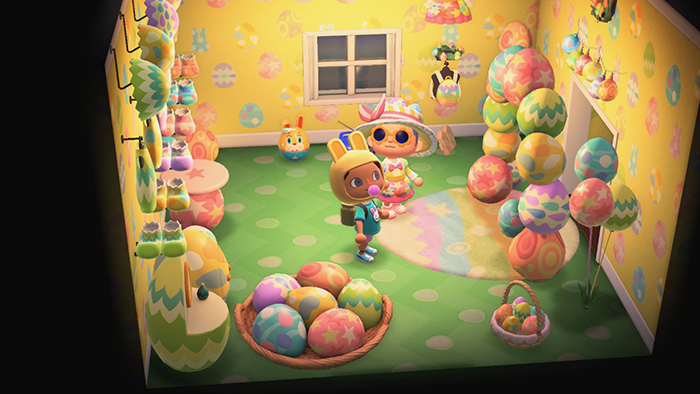 And then as soon as the event was over, I sold every single Bunny Day item, and whatever eggs I had remaining. As someone who grew up with a hoarder, I found it cathartic to take all that exclusive special-edition ugly junk, and throw it in the garbage.

Then, I redecorated the room to look like a landfill. 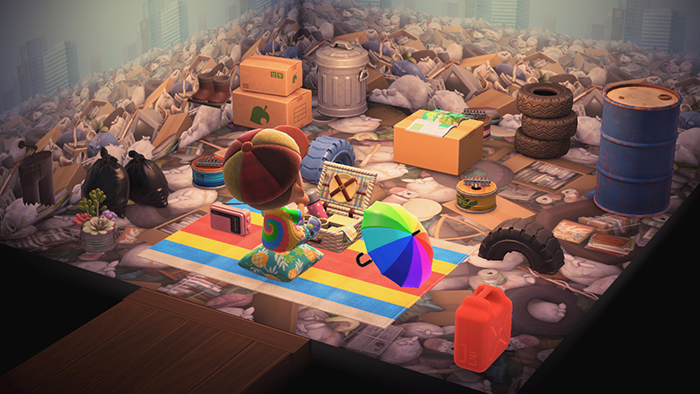 On the micro-level, Animal Crossing is a relaxing game about a multitude of simple tasks–catching fish and bugs, combing beaches, gently bumping trees with your axe, talking to villagers, delivering goods to your employer-landlord. Or, not doing any of that, if you so please.

But on the larger scale, it is a game about sifting–sifting through furniture to decorate your rooms and island, and sifting through clothes to design outfits. 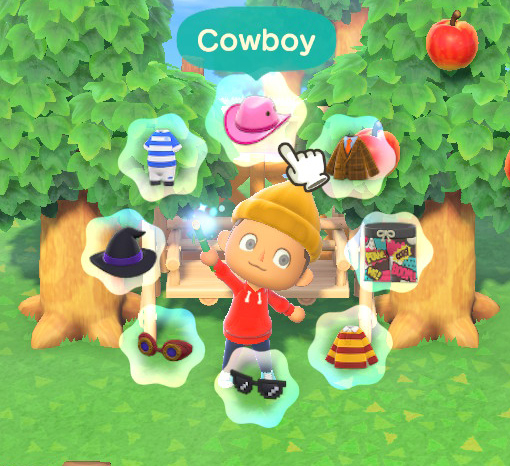 One of my favorite additions to Animal Crossing: a magic wand that will change into a set of outfits.

The problem with sifting as a gameplay element, is that eventually you find what you want, and then sifting begins to feel futile and pointless. This happens in many games with loot and equipment systems. Eventually you find equipment so good that it’s difficult to find any equipment that’s better. If finding better equipment was part of what made the game enjoyable, then the game has lost that part. Many games solve this problem by giving you steadily better equipment over time. And there was Zelda: Breath of the Wild‘s solution of perpetually breaking your weapons.

In Animal Crossing, you have to supply your own solution. To a small extent, you get access to more items to sift through, and more rooms to decorate. But sooner or later, you (that is, I) find yourself stuck in the rut of already having decorations you like, and having little power to improve them.

I played the original Animal Crossing when I was a teenager. I remember building out a tropical/tiki themed room stuffed full of junk, and K.K. Mambo playing on repeat. It was bad. Even at the time, I knew it was suffocating. But what was I supposed to do, just throw it out and start from scratch? Nope, better just give a bunch of money to a greedy tanuki in order to expand my house!

Sentimentality over useless junk: that was the ultimate boss, which I could not defeat.

Later in my 20s, I played Animal Crossing: New Leaf. At the time, I hit upon the idea of ironically decorating my house with holiday-themed furniture, specifically using the “snowman” set. 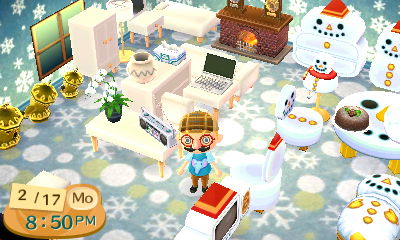 As long as I’ve known Animal Crossing, holiday-themed furniture has been really weird and ugly. I didn’t collect it because I liked it, I collected it because I could, for a limited time. Then I threw it out afterwards, because it’s trash. You see, I was giving myself a relatively easy boss, a room that I would have no qualms tearing apart.

Unfortunately, I replaced the snowman set with my own personal nightmare, a room that I liked so much that I could not possibly defeat it. I took all the white furniture from the snowman room, and made a mirror image in shiny purple. 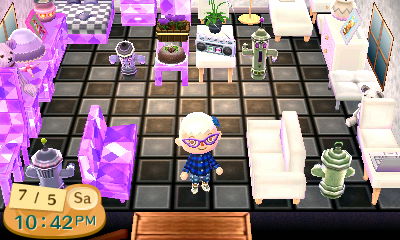 And no, it did not escape me how ace the coloring scheme was.

This room went through a few iterations, but at that point I was finished. There was nothing to be done, but to expand the house.

(As part of my research, I revisited my old town in order to take screenshots. I found that I had two other rooms, one with an underwater theme, and the second without much of a theme but a bright and upbeat coloring scheme. 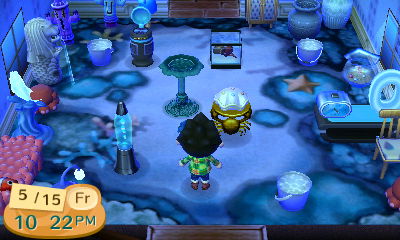 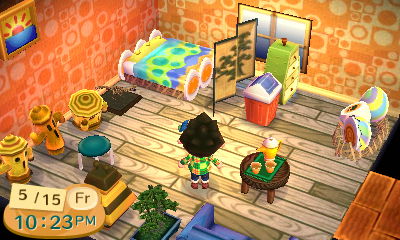 I like ’em, but I’m sure I could have beat them if I had played a bit more.)

Currently, in Animal Crossing in New Horizons, I have given myself multiple bosses. There is the landfill room above, which I quite like even though it is literally garbage. I also built a jungle lab–which I love a bit too much, but I’ll beat it yet. 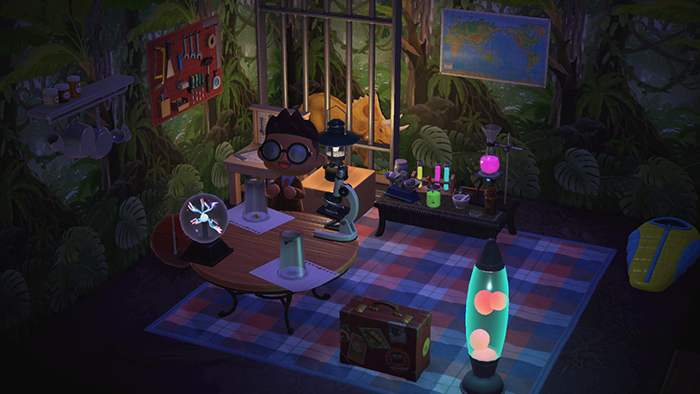 And then there is my main room, which started out with a “messy bachelor pad” theme, and then developed into something even less thematically coherent. I don’t try too hard on the main room, because I like it to be something that I can just easily swap things in and out of, as pleases my whims. 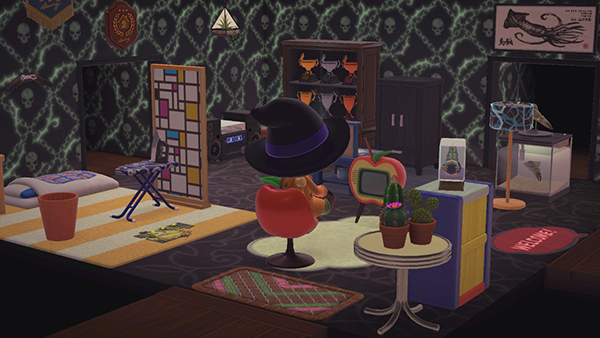 Then I look at what Animal Crossing streamers are doing on YouTube. Seeing the impeccably landscaped island towns, I feel like we just might be playing different games.