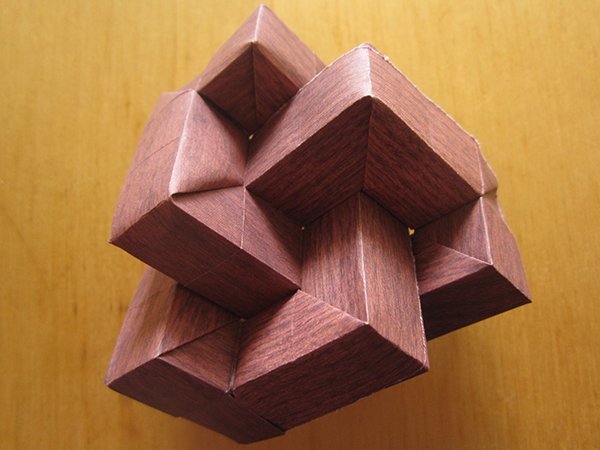 Although this blog has a standing ban on nontrivial knots, this piece of origami defies the ban because it knows it can get away with it.

I have two comments on this model.  First, I’ll explain how the choice of paper presents a philosophical problem.  Second, I’ll talk a bit about the inspiration for the model.

I found this wood-grain printed paper at the local Daiso store, and I was quite happy with it.  It fits this model perfectly, because it’s exactly the kind of shape you might see in a wood-cut sculpture.  In fact, you weren’t looking too carefully, you might look at this model and conclude that it was made of wood.

This is known in philosophy as the Gettier problem.  Basically, it shows that knowledge is not merely justified true belief.  It is also necessary that there is some connection between the justification and the truth.  Here, the origami is made of wood, but that’s just because paper is made of wood.  The appearance of a wood-grain pattern is an unrelated fact.

The inspiration for the Knotted Toroid came from reading about regular toroids.  A “toroid” is a polyhedra with the topology of a donut.  A toroid is “regular” when all of its faces are the same kind of polygon (eg quadrilateral or hexagon).  It turns out that all regular toroids have either triangle, quadrilateral, or hexagonal faces.  This was all explained by Lajos Szilassi, who also provided examples of several toroids.  One example looks a lot like the Knotted Toroid that I made.

I liked Richard Carrier, past tense » « I used to think Santa was a myth