I’m fortunate for a lot of reasons present circumstances aside. I have my health and a few generous readers here who kicked in to my annual Holiday begfest to the tune of several hundred dollars. A couple hundred more dollars, just ten readers with 20 bucks, and I’m done for the year! This time, it’s not just me, I’m helping someone else too.

Please use the Paypal email address DarkSydoTheMoon-at-aol. Or you can use the snail-mail address 11512 Tincup #109, Austin, TX 78750 addressed to my agent G. Scanlon FBO Steven Andrew. 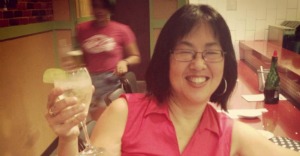 Christmas 2013: A few days before the sudden, unexpected seizure that would begin the diagnosis leading to inoperable brain cancer

I briefly posted a few days ago about my old friend who is recovering from devastating brain surgery. She had cancer, aggressive glioblastoma, the prognosis is usually grim and short. But it responded well to intense radiation and chemo. It shrunk to the size of a cherry and encapsulated, meaning she will almost certainly live out the rest of this year even if it snaps back into life, and has a better than 50/50 chance of living the rest of her live cancer free. But that life will be very different.

She lost almost complete function on one side of her body, including the eye and some brain function there. She was told she would never walk, never drive. She was told diplomatically that she would always be a burden. The woman may be disabled, but she’s an athlete at heart, with the determination and pain tolerance of a Navy Seal in training.

And, I resolved to help her prove the docs wrong. Working with physical therapist ex-climbers, we developed a set of exercises to optimize her chances of a normal life. We reversed engineered what it would take for her to even be able to stand up. We built a very crude frame that hangs over a donated treadmill with a climbing harness for her to tie into, to keep her from hitting the ground when she stumbles, where she can practice walking and work the muscles needed in safety. I over see that part of her recovery, setting the tension, learning how to cue her on the proper heel-strike roll onto the ball of the foot and push off system. What we’re counting on is called neural plasticity, rewiring portions of the brain to compensate for missing brain cells and connections. 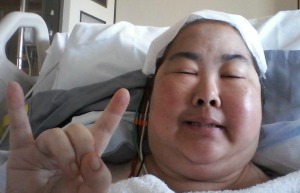 Fall 2014 hours after third operation to clean out brain infection

It was slow going at first. But over the last week she’s gone from non weight-bearing, to being able to stand up out of the wheel chair with no hands, to being able to putter a few steps with a walker ahead of me while I nervously hold her harness in case she falls — and she falls a lot. Our motto is “Failure is an Option!” Over the last few weeks I’ve been her specialized chef, coach, and terribly unqualified physical therapist assistant, creating healthy, low carb hi nutrient rich spartan meals designed to lower her body weight and blow out the water weight gain she suffered during massive cortisone meds; she has lost 20 lbs in one month and I’m confident we can get her back down to her normally healthy body-mass index.

This week she insisted on starting to work more intensely. We started with her PTs, ran everything up the flagpole, and analyzed the logistics, what movements would have to be worked on, and worked those muscles separately. After just a few workout sessions, her face straining with the effort to do what a toddler does without a second thought, she stood up on her own power and took her first walker step. Then another, and another, and then she turned around and walked back. Those brief six steps lead me to believe she will learn to walk normally, or at least well enough to enjoy life to its fullest.

Then, early this morning, as I was sleeping on a couch at the other end of the house from her room, I was shaken awake by her, standing over me. She had gotten out of bed by herself, went potty, and then walked all the way out to me on her cane and was shaking me with a big ear-ear grin asking “What’s for breakfast?”

I played it off because, hey, I’m a guy and I’m so so sooo cool, but inside I was trying to keep from shaking as the tears welled in my cool eyes and flowed down my cool male face. What an incredible human being she is! That she did all this while loosing every strand of hair including her eyebrows, gaining 80 lbs from inactivity and high doses of cortical steroid, getting blown off by her boyfriend in the midst of multiple brain surgeries and chemo, sending her only child, just out of high school, off to college 2000 miles away — her daughter earned a full engineering scholarship to MIT where she made a 4.0 her first year after already being skipped out of Calculus I, ll, and III. Her first math class was calculus of variations, an impressive accomplishment for anyone, let alone at 18 year-old with a mom diagnosed as terminal at one point.

My friend was having to pay a ton of money for live in nursing assistants, which costs an arm and a leg, and she doesn’t have much in the way of disability income — welcome to Mitt Romney’s America, unless you call $1400 a month and a modest IRA rollover a lot. Naturally, her old company cooked up a way to fire her right before the diagnosis was made and days before FMLA kicked in, so she had to go to COBRA. That, together with a dozen meds and rehab and copays and the nurses and CNA’s means she’s broke all day long.

Because we seem to work so well together, she offered to pay me what the CNAs were getting which adds up to over 1500 month. My counter offer was $250 a month, just to cover gas driving her around and basic bills like car insurance or cell phone. And I said that that $250 would only be necessary if she has it to spare that month and only until I get a job I can do from home. Which means I’ll be able to blog my brains out, do free lance work, maybe even part time tech support from the comfort of her living room in a nice upper middle class house.

I can’t tell you much more relaxed I am, how perfect this is, and relieved; that in a sense she saved me from hopeless poverty in a tiny studio apartment working endless cube farm jobs for peanuts, or looming homelessness should I give up or get sick or hurt. Watching her guts, observing her progress, it’s already the best job I’ve had in a long time. And it’s a win-win: if not for this arrangement, she’d be making plans to live in an orthopedic nursing home where she’d be miserable. Now she’ll get to stay in her own place in her old neighborhood, where she’s lived for 16 years.

Last night we talked about God and Heaven and all that stuff. I was worried about fessing up I was a staunch atheist, people in her situation might be holding onto religion with a death grip. But she’s not, she faces reality as it, in fact she’s borderline atheist herself. Think how much drive and quality of character that takes. She’s facing down death, went fro cute as a button to bloated with water weight for now, her hair is patchy and what little is left is cut almost to the scalp, clearly showing the confusion of scars and bone deformities from prior procedures. She’s faced huge amounts of pain and nightmares and anxiety, and she does it without much in the way of religious belief or mysticism or even much in the way of painkillers. She does it on her own. I wonder what the self reliant Christy alpha-male teatards would make of that? I mean, she’s just a girl … <eyeroll>

She went from a gorgeous healthy single mom supporting herself and brilliant, kick ass child who never got in a lick trouble, while working a social worker and parole officer — not great pay — to what she calls her Happy Buddha impersonation unable to get out of bed.  And yet she beams with smiles, she lights up the room, she lowers her head so that staring little kids and can see and play with the scars and laugh, and she laughs right along with them. I’ve seen several moms and dads come up afterward and thank her for helping their children learn to deal with hurt people out in public.

She’ll never be “out of the woods,” on this. The cancer can always come back, she will probably never run full speed without a care in the world, or enjoy so many things we take for granted. But watching her progress is so damn uplifting that she’s begun to compile a record of it (She’s been wanting to blog it for months, not my idea, I’ve tried to talk her out of it. In fact this post was done in part to give her a taste of it). But some people might get something out of reading over her experiences and she likes to write.

So maybe, down the road, depending no how she feels, we may even have some video to show you, past and present, before and after, so that you can some of what I’m privileged to be a part of these days. For the rest of this week, that money goes to mitigate my expenses related to helping her, or straight into her account.