I’ve had a couple of job interviews the last few days keeping me busy. The job market has noticeably improved. I can’t quite pick and choose among plum jobs, but there are offers on the table starting as early as Jan 5, 2015, for stuff that will keep the lights on and none too soon. In the meantime, I thank those of you who found the generosity and holiday spirit — despite your purportedly cold, immoral atheist hearts — to send some paypal or snail mail bucks my way. If you haven’t yet contributed and are able to, the blog bucks I receive from the annual Christmas bleg are vital to the continued operation of this site and my ability to stay in the lifestyle in which I have become accustomed, i.e., food, water, and Internet. My Paypal email is Darksydothemoon-at-at AOL, thanks!

While that was going on we had a blockbuster and, in the opinion of many, long overdue development yesterday afternoon. Technically overseas but in reality closer than most US cities in neighboring states are to each other. Working behind the scenes with Pope Francis, the Obama administration secured the release of several American prisoners in Cuba and that’s just the tip of the iceberg: 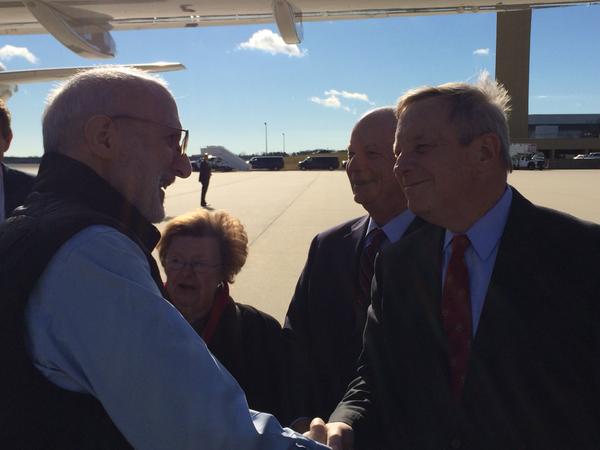 NYT — On Wednesday morning, Mr. Gross walked out of a Cuban prison and boarded an American military plane that flew him to Washington, accompanied by his wife, Judy. While eating a corned beef sandwich on rye bread with mustard during the flight, Mr. Gross received a call from Mr. Obama. “He’s back where he belongs, in America with his family, home for Hanukkah,” Mr. Obama said later.

For its part, the United States sent back three imprisoned Cuban spies who were caught in 1998 and had become a cause célèbre for the Havana government. They were swapped for Rolando Sarraf Trujillo, a Cuban who had worked as an agent for American intelligence and had been in a Cuban prison for nearly 20 years, according to a senior American official. Mr. Gross was not technically part of the swap, officials said, but was released separately on “humanitarian grounds,” a distinction critics found unpersuasive.

The United States will ease restrictions on remittances, travel and banking, while Cuba will allow more Internet access and release 53 Cubans identified as political prisoners by the United States. Although the embargo will remain in place, the president called for an “honest and serious debate about lifting” it, which would require an act of Congress.

The breakthrough is widely hailed, here and abroad, as a positive step, closing the door on the last remaining vestige of the Cold War in this hemisphere. Cuba was one of the chief, original communist dominoes. Fifty-years ago we damn near had a nuclear war over this tiny island located just 90 miles south of Miami. There are of a course a few dead-enders fanning the usual decades old commie paranoia talking points. You can guess what network is providing the platform and what party is doing most of the spouting. But for the thousands of Cuban-Americans with family back on the island, this is a dream come true. Those voices hyperbolic criticism are in the minority to say the least.

A poll conducted by the Atlantic in Feb 2014 shows widespread support for normalizing relations with Cuba. Click image for full article

I’m always happy to criticize Obama for being too cautious. Far from the radical caricature portrayed in right-wing panic rooms, this President has distinguished himself as a careful centrist, democratic politician to a degree that has at times driven people like me nuts. I’m always happy to agree with my skeptical colleagues, like Ed Brayton, who point out that the President has little day-to-day control, if any, over gas prices and therefore little short-term control over inflation and the macro-economy that low energy costs enable, and that therefore it’s a quite stretch at best to praise the WH for those things. It wasn’t Obama that knocked gas to near two bucks a gallon thus keeping a lid on inflation and interest rates, both of which our weakish economic recovery is currently dependent on to the point of insanity. OPEC did that, ostensibly to undercut growing US production from more expensive domestic tar sands and shale oil sources.

In this case, I think it’s fair to give the President some credit. Obama said he was going to make this a priority two years ago, and he did, carefully and thoughtfully. It was done in the full knowledge that the usual suspects would go apeshit — and some already have, Cruz, Rubio, Jindal et al, the usual GOP clown car 2016 hopefuls are all whining. Working with Pope Francis was brilliant, it immunized the WH to the extent possible from an entrenched, militant anti-Castro lobby based mostly in the key swing state of Florida, it gave the affair a stamp of international credibility, and it not only helps with the Latino community as a whole, it helps integrate Cuban-Americans into that growing, powerful, progressive voting bloc. It’s also the right thing to do strategically: Cuba represents no threat whatsoever in the conventional sense and hasn’t for decades.

All in all, any rational human being who spends a few minutes studying the history of Cuban-American relations in the context of the Cold War and more recent events would surely agree with that assessment and give this turn of events two opposable primate digits up. Cigar enthusiasts will soon enjoy a extra special fringe benefit!