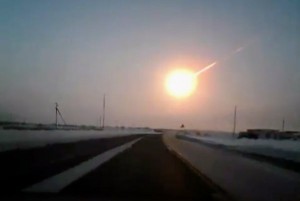 Second Update 7 PM Cdentral: This is now looks completely unrelated to the larger NEO. But interestingly, there are conspiracy theories now popping up, mostly in Russia, that this was an attack or test attack of some sort from an unfriendly nation and the Russian government is covering that up for political reasons. Or variations on that. I’ve only seen it so far on some weird sites, that I had to badly translate, so I’m gonna have to dig around to get some details and better links. Anybody heard anything about this?

Update: Video now emerging, see below, more to come. One researcher told me it’s possible an NEO making a close pass today may have calved off some small chunks. Unconfirmed, reputable sources say unlikely at this time.

It wasn’t in the same class as the 1908 Tungaska Event, but Siberia got clobbered good with at least a ten ton space rock. Astronomers are scouring the region already for clues to its exact size, composition, and origin:

NYT — Bright objects, apparently debris from a meteorite, streaked through the sky in western Siberia early on Friday, accompanied by a boom that damaged buildings across a vast area of territory. Hundreds of people were reported to have been injured, most from breaking glass.Scientists believe the bolide exploded and evaporated at a height of around 20 to 30 miles above the Earth’s surface, but that small fragments may have reached the ground, the statement said.

The governor of the Chelyabinsk district reported that a search team had found an impact crater on the outskirts of a city about 50 miles west of Chelyabinsk. An official from the Interior Ministry told the Russian news agency Interfax that three large pieces of meteorite debris had been retrieved in the area and that 10,000 police officers are searching for more.

A small asteroid, known as 2012 DA14, is expected to pass close to Earth later on Friday, NASA reported on its Web site. Aleksandr Y. Dudorov, a physicist at Chelyabinsk State University, said it was possible that the meteorite may have been flying alongside the asteroid.

It’s chilling to think, had this same thing happened at the height of the cold war, say during the Cuban Missile Crisis, or the Reagan Era high alert deal, the counter strike missiles could already be landing. Mushroom clouds blossoming all over, on at least thee continents, and civilization as we know it would be ending, right now.