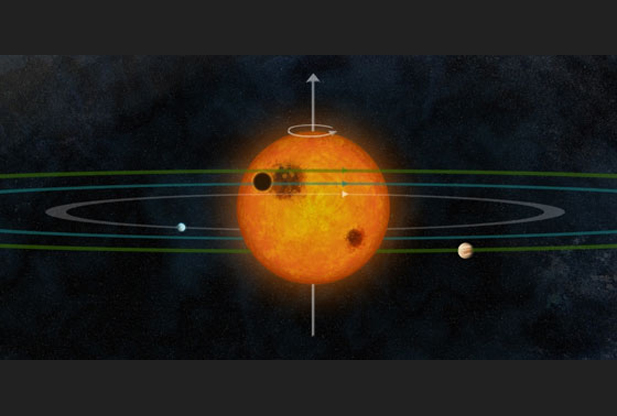 We’ve found a lot of strange exo-planets in the last two decades, hot Jupiter’s spiraling into their star like giant comets and super earths that could be covered in exotic oceans and ices hundreds of miles deep. Before it’s all over, Kepler may end up being the most famous name in all the Milky Way galaxy! Now the plucky telescope by the same name has found an alien system that looks a little more familiar in one key respect:

Red Orbit — The study shows the trio of planets orbiting the star within one degree, relative to each other, and relative to the star’s equator, showing a sense of geometry in its alignment.

“In our solar system, the trajectory of the planets is parallel to the rotation of the sun, which shows they probably formed from a spinning disc,” Roberto Sanchis-Ojeda, a physics graduate student at MIT who led the research, said. “In this system, we show that the same thing happens.”

Kepler 30 is a main sequence yellow-white star similar in size and development to our sun. At least two of the planets are likely to be gas giants roughly the size and mass of Jupiter or Saturn. But we won’t be visiting this familiar arrangement anytime soon: it’s about 10,000 light-years away from ours.

Mitt Romney goes on overseas apology binge » « DK Radio is on the air & I want as many of you on it as I can get!