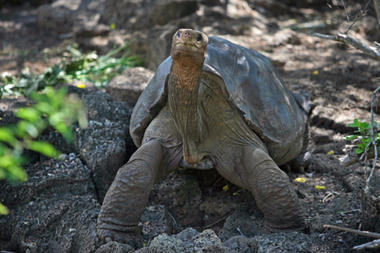 No one knows his exact age, but the giant tortoise Lonesome George passed away quietly in his enclosure at the Charles Darwin Research Station in the Galapagos Islands:

CS Monitor— Though Lonesome George was about 100, that is apparently not very old for his species, scientists say. He could have lived for at least a few decades longer, even to 200 – perhaps long enough to provide the elusive offspring that the conservation world so desperately sought. (They will be doing an investigation to determine the cause of death).

And while George may have been lonesome for being the last of his kind, with his potential mates, and scientists, journalists, and the public endeared to him, he lived a full life.