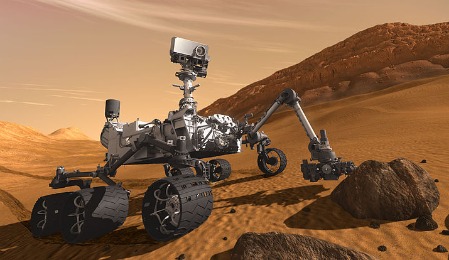 Yesterday’s WH budget proposal for NASA, with deep cuts to future planetary science to the whopping tune of $300 million , didn’t exactly come as a shock. That’s the news reporters have been hearing and writing about for weeks. But if those changes are implemented it comes at a price. In this case, the price could be postponing the single greatest scientific discovery ever made.

One mission is already in the pipeline. The Mars Science Lab is a sophisticated rover currently en route to the Red Planet, on schedule to land at Gale Crater in August 2012. Dubbed Curiousity, it will have many times the capacity of the last three rovers including better cameras, greater range and resolution, and next gen onboard analytical tools, including chemical sensors designed to detect biosignatures and focus stacking for image processing. Its primary mission is to confirm signs of ancient water, look for remains of the building blocks of life, examine minerology, past and present climatology, and in short single out possible places for future missions to look for past or present life. It’s those future missions where the cuts really hurt.

Mars became center stage in the search for ET life when tantalizing chemical signatures were found in a meteorite recovered in Antarctica in 1984 (The rock known as ALH 84001 was originally chipped off the planet millions of years ago and eventually fell to earth). Moreover, with Spirit and Opportunity it’s become a consensus position that Mars once had vast standing lakes and oceans. In addition traces of methane were detected in the thin Martian atmosphere and those traces were found to be 1) localized and 2) waxing and waning with the planet’s long summers and winters. On earth methane is produced by scads of biological sources, many of them microbial and some of them extremophiles, or by geological process such as volcanoes. But there are no known analogous geological processes on Mars today. Water, the meteorite, and methane, all taken together, have astrobiologists — and even lowly bloggers like me — plenty excited about the prospect of past life on Mars … and maybe even some hardy, scattered, surviving descendants?

It’s possible. On earth today there are methane producing microbes in caves, in ice pockets, in superheated water, soil, inside rock, and even inside you. They are incredibly tough and tenacious, thought to represent one of the earliest forms of bacteria like microbes to evolve on earth, known collectively as Archaea. These were some of the first known living things to appear on earth, and they appear on earth billions of years ago — when Mars still had water! It’s even possible earth and Mars exchanged biotic or prebiotic material thru impacts. If so, since the smaller, more distant world would have cooled quicker in the wake of heavy bombardment, life or its antecedents could have arisen on Mars first. We might all be, ultimately, Martians. If such microbes existed on Mars at any time in the past, and exist on earth today, one way or another its evidence that life could well be exist elsewhere in the solar system and throughout the universe.

You might think Archaea hitching a ride on meteors to other planets would be impossible, meteors are sterilized by heat during reentry, right? Mostly, yes, the medium-sized ones anyway. But very small particles have so much surface area compared to their volume that they might be able to radiate the heat without warming up much. And large objects can plow in with their interiors unaffected by reentry heat, releasing dead material that could act like a molecular scaffold for native precursors, or perhaps even unleashing the real pulsing, breathing, slimy thing on a barren, blazing hot earth, or distant outer moons, asteroids, and maybe even Kuiper Belt Objects all the way to the Oort Cloud.

There is no better, cheaper, accessible place to try and settle this great question than Mars. Is there anything more exciting in all of science?

Two missions that would follow-up on all those fascinating ideas and, more importantly, any leads generated by Curiosity, are jointly funded by NASA and the European Space Agency. They are slated for launch at the end of this decade — or at least they were. Because those are precisely the missions most affected by the proposed cuts. Phil puts it in perspective:

(Bad Astronomy) — In other words, the amount of money being cut from Mars exploration is equal to what we were spending on the War on Terror in just 15 hours. … You might want to read that again. For the cost of less than a single day on the War on Terror, we could have a robust and far-reaching program to explore Mars, look for signs of life on another planet …

If those cuts go through, we will be bailing on our commitment to our ESA partners after they, and we, have already spent a considerable sum of money. And we’ll be postponing the missions that could settle the most important question in science, indeed for our very species, once and for all, by years or even decades.