A few hundred years ago a new fad was sweeping through the ranks of European privilege. It was a substance refined from an enigmatic plant brought back from the New World. While it was hailed as a ‘miracle’ by some, more recent experience has shown that it can produce erratic behavior, serious weight fluctuations, and systemic organ failure. Even first time users can fall victim. But it’s not all bad! On my very first date with Mrs. DS, at the close of the go-go nineties, she and I both indulged. Soon the mysterious extract worked its neurotransmitter magic, we gazed into each other’s now fluttering, blazing eyes, and fell madly in love.

If you could travel back about 150 million years, you’d be well advised to watch where you step. Saurian monsters abound, hungry eyes watch from ambush. With all that to worry about, it would be easy to miss the most important new organism to arise in ages, standing low amid the tangled ferns and towering conifers. But a sharp-eyed observer might have made out a dash of red or yellow, in contrast to a planet which had known mostly green rain forests and blue oceans for eons.

It was an angiosperm, more commonly known as a flowering plant, and it would change the world. One of the earliest successful versions may have resembled the Archaefructus, currently classified by some paleobotonists as a possible transitional angiosperm, and believed to inhabit the marshy shores of late Jurassic creeks and ponds.

After the K-T Impact 65 million years ago that wiped out the dinos, flowering plants served the survivors up with a smash hit; fruits, nuts, and grasses. Seeds were transported far and wide by animal courier, often deposited in a pad of rich, homemade fertilizer, pollen was transferred by insects often waved into the blozzoms by invisible UV patterns. All in all it was the most ingenious duet ever devised by fauna and flora since the two kingdoms learned to thrive off each others’ toxic waste gases hundreds of millions of years earlier. The new plants spread like wildfire. Earth was soon graced by bright blossoms and sweet perfumes from icy tundra to balmy equator. 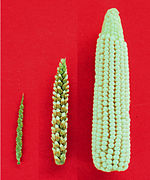 Teosinte: from grassy flower top to corn cob in a few thousand years

The partnership offered to animals by humble grasses alone transformed entire continents. By about 30 million years ago they dominated the steamy forest floors and vast arid plains, giving rise to the largest land-dwelling mammals in the history of life on earth. Over the next 25 million years a few of these hardy flowering grasses evolved into the forerunners of modern grain and sugar cane. Those two groups of angiosperms now account for about two-thirds to three-quarters of the human diet. Trillions of calories are consumed every day in the form of wheat, rice, corn, and sugar. And each pound of meat, every gallon of milk, represents bushels of grain. Quite literally, humans are flower-powered.

Of course, the plants could never fully trust their new animal partners. So they developed potent counter measures. Wait until fruit is ripe, when the seeds are ready for dispersal, and you were rewarded with a tasty treat. Eat them beforehand, and you might get a tummy ache from hell. Consuming the wrong parts, like leaves, stems, or bark, could earn the offender a lingering, toxic death. Many modern drugs originate from such defenses; Quinine from tree bark, caffeine from coffee beans, and narcotics from poppies.

Which brings me back to my first date with the future Mrs. DS and the highly habit-forming, brain altering substance we ingested at the dawn of the New Millennium. The source was a flowering plant found in present day Latin America, the substance it produces is truly sublime, and for some people, downright addictive. But we broke no Draconian Drug Laws. It was first used in a crude form by meso-Americans over a thousand years ago. The Aztec’s called it Xo-co-latl, but we know it today as Chocolate.

Reminder folks, Valentine’s Day is tomorrow, and I bet there is probably someone, somewhere, who would enjoy a card or a call from you. — DS