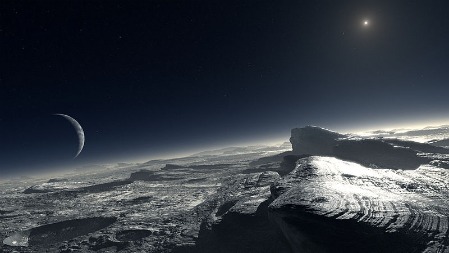 CRIRES model-based computer-generated impression of the Plutonian surface, with atmospheric haze, and Charon and the Sun in the sky.

The official budget won’t be released until Monday, but word is NASA’s unmanned program will see big cuts and Mars missions will take the brunt of them. Sadly, when it comes to our budget priorities as of late, we are one screwed-up country:

(CBC News) — The two scientists, who spoke on condition of anonymity, said they were briefed on the 2013 NASA budget. NASA’s planetary science budget, currently $1.5 billion, is slated for a $300 million cut. $200 million of that will come from the Mars budget. The current Mars budget is $581.7 million. “To me, it’s totally irrational and unjustified,” said Edward Weiler, NASA’s former associate administrator for science. “We are the only country on this planet that has the demonstrated ability to land on another planet, namely Mars. It is a national prestige issue.” 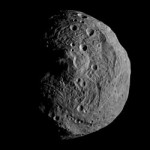 4 Vesta as seen by the Dawn spacecraft

For starters, money spent on unmanned missions enjoy the full benefit of Moore’s Law and give us the biggest bang for the buck by far. The combined cost of New Horizons to Pluto and the Kuiper Belt and Dawn to Vesta and Ceres — exploring half a dozen worlds we have never seen close up — cost about what we spent on two shuttle launches, and that unmanned money is spread over a decade or more!

And that’s not even the most sickening part. We gave the bankstas who sank our economy about a trillion in cash and trillions more in no interest loans. For perspective, if we gave NASA a trillion dollar no interest loan, just the interest that agency could earn off of Treasury Notes over 10 years would fund both of those missions above with enough left over to cover a veritable fleet of interplanetary spacecraft including landers, floaters, and orbiters.

Say it another way, the amount of money we will save by cutting $300 million out of NASA is 0.3% of what we forked over to the very same losers who created the most toxic debt instruments in history. Which, incidentally, are the same assholes who now presume to lecture the entire nation on things like financial responsibility and proper deficit management. Imagine what we might have missed if those ass wipes had tanked Cassini-Huygens or the Hubble Space Telescope! 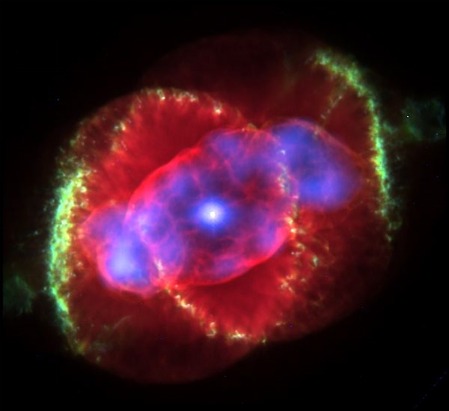 Yeah. Bandwidth prevents me from featuring even a fraction of the exquisite images, not to mention enough hard science, from cryovolcanoes to Dark Energy, to keep an army of astronomers busy for years.

Odds are the cuts are partially in response to the pressure from the manned program, sort of on life support for now. The utility of that is debatable, unmanned missions deliver the goods. Then again, manned spaceflight compares rather favorably with spending a single goddamn month in Iraq getting shot at chasing down phantom nukes. But if we are going to pursue it, there are dozens of emerging, private sector Newspace companies chomping at the bit to provide every kind of vehicle and service you can imagine for substantially less than the going-nowhere-fast SLS pork barrel handout masquerading as a manned space program preserved to garnish a few congressional districts.

The scariest part, this could be the tip of the iceberg, merely the beginning, of our great national descent into cosmic mediocrity. I think I’m going to fucking throw up.

The flower duet » « Let’s all go to the lobby: Santorum surges