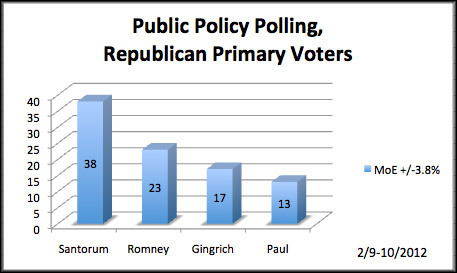 A liberal, a moderate, and a conservative walked into a bar, the bartender looks up and says, “Hi Mitt!” That’s the joke, but it seems to keep landing. Witness new polling from PPP that shows Rick Santorum opening up a commanding lead over all the incarnations of Mitt Romney offered to date:

(Daily Kos) — We’ve said all along that this primary is hurting Romney, though I still expect his money and organization to win out. But what will Republicans be left with other than unelectable candidates with indefensible right wing positions on health care (including women’s health care), nothing to offer on the economy and jobs, and candidates who may well not carry their own states?

The next big GOP contest will be Arizona and that state has a pretty crazy wingnut base vying with a significant number of Mormons. If Mitt underperforms there, and doesn’t stand out on Super Tuesday early next month, there could be serious trouble all the way to the convention. You know what time it is!