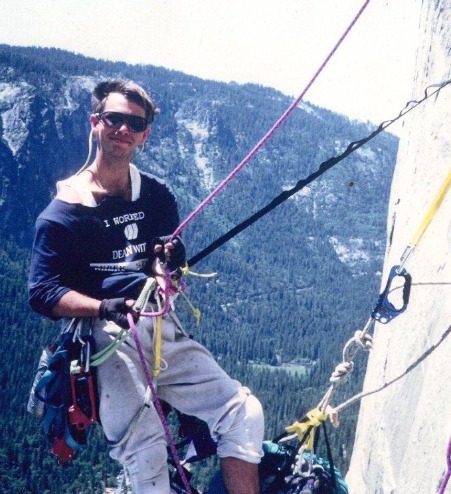 That's me, about pitch 20, a little over halfway up the 3000 foot face on a route called the Nose on El Capitan in Yosemite. Which has almost nothing to do with the story below. Unseen are my two awesome team mates, JP and Action Jackson.

About 20 years ago I was at a climbing area in Central Texas, a beautiful potassium feldspar pluton formed half a billion a years ago, and recently exposed by uplift, now blooming into classic exfoliation domes the size of small towns. In this region there is a designated rappelling rock, a great location with a panoramic view, featuring sheer 25 meter drops almost all around. For climbers, rappelling is not a sport, it’s a risky necessity only done when needed. Sometimes it’s the easiest way down, but few climbers rap for fun.

Free climbing means you support your body weight with your hands and feet on holds, the rope is there in case you fall. It saves your life if you do, but the idea is to not hang on it (Climbing without a rope is called soloing, climbs where you hang on ropes and anchors is called aid climbing). Pro climbers get hurt or killed rapping every year, because a rappeller is totally dependent on that anchor and gear at every point during the descent. I’ve had two friends, both bad-ass climbers, get killed doing it. This danger is greatly amplified by new people who don’t know much about the sport and start out rappeling.

So for safety’s sake, at the top of this particular spire of rock, are several 3/8 inch steel expansion bolts — right next to a plaque that at the time read CERTIFIED ANCHOR — with beefy welded chains ending in big oval rings designed for ropes to go through. There was also about 30 feet of old-fashioned rotten canvas firehose sheath that had been left in a pile up there long ago for reasons unknown. Naturally, a church group of non-climbers came along to go rappelling and guess what their “leader” chose to use as an anchor?

The tragic flaw is the rotten fire hose would have worked, it was thick and hardy despite having been exposed to sun and ice for years. It probably could have held a truck. But the aforementioned leader wrapped it around a rocky knob and tied two half hitches into one side only, so it was like a reverse hangman’s noose. He then assumed leadership duties and tested the anchor by going first. The only miracle that happened that day was when that guy got to the ground in one piece. But the next guy wasn’t so lucky. The reverse noose slid open when that poor fella was about halfway down. The group had not set up an independent belay line.

Imagine standing on the tippy-top of a standard telephone pole and falling off it backwards. The guy fell a good thirty-feet or more onto rough gravel covering rock, flailing and off-balance I’m told, landing flat on one side. I didn’t know exactly what had happened, I was helping a class being run by experienced rock climbers when the muffled ruckus — pierced by shrieks of terror, then dead silence, finally broken by a lone female voice screaming “Oh my God, he’s DEAD!” — made their way through the little canyons and nooks below to my horrified ears.

It took me a good five or ten minutes to get down from where I was and get over there. The fall had happened at the worst place possible for that height, the guy had been rappelling through a beautiful confluence of rock, a vertical sandwich where the rap wall and an opposing overhang jut close together and where the ground just happens to dip leaving one suspended in a really cool cave-like place, you know, when it’s fucking done right. That’s when the rig had unraveled.

By the time I arrived the group had made their way down and gathered at the unfortunate man’s side, they had joined hands in a sobbing prayer circle. Considering what had happened the guy was actually in OK shape. No doubt he had snapped ribs, maybe a broken bone here and there, maybe a shattered pelvis, there was a split in one side deep enough that I probably could have jammed a hand into his love handle and grabbed a kidney. But he didn’t look too shocky, he was breathing well, he had feeling in all his extremities. The poor guy was badly dazed, but otherwise conscious and responsive. It looked like there was plenty of time to save this dude. But internal injuries are tricky: he could have nodded off any second for good.

That’s when it hit me, as I was trying to extract info from his hysterical friends while the golden hour ticked down, no one in the church group had thought to try to reach help. They probably didn’t even know which way help was, but you’d think one of em would have had a cell phone or asked other people, or something. It was a warm, beautiful Saturday, there were climbers and tourons all over. The group was scared shitless, understandable, but the way they coped was to squat there crying and hugging and praying, and not sprinting for emergency help. I almost laid into them for being complete idiots, especially the “leader,” as I pieced together the story of what this fool had done up top.

Seriously, just a few hundred feet away in full view from the top of the rap station was our entire climbing class staff hanging out on a vertical wall hollering instructions to students below. We were brightly clad in flaming flourescent lycra, wearing hip multihued climbing shoes, setting top-ropes with pink slings, shiny biners, and various clanking devices swinging coolly off our sleek harnesses. If you were new at this, if you were in any way unsure of anything, might you not ask such obvious, confident experts what they think of your anchor, the rig which will soon be the only thing between a dozen of your best friends and death?

Boom, I was on my way out at full run, thank FSM someone else nearby had heard and had already taken off on foot for help. By the time I was out in the open a ranger truck came tearing around the plain behind the main dome, ripping through weeds and shrubs on up through the talus on a narrow foot trail. Soon another truck came flying along with an EMT in it, the victim was quickly in a backboard and soon on his way to an ER. I heard later he made it OK.

The stupidity and terrible luck for everyone involved in that whole deal always stuck with me. But I bet they talk to this day about the life-saving miracle of Jesus Christ and the power of prayer they witnessed at Enchanted Rock.

Let’s All Go to the Lobby: Release the hounds! » « For Newt Gingrich so loved marriage he wanted his wife to share him with a younger woman