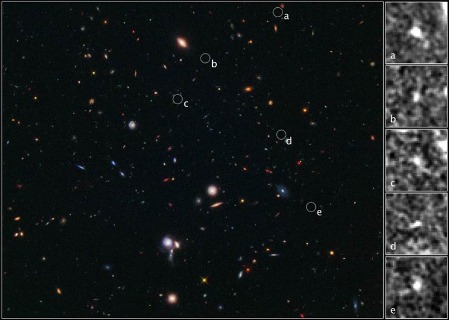 What can a young earther say? In stark irony to the poll of evangelical pastors “almost evenly split” on whether the earth, and presumably the universe, are a few thousand years old, the Hubble looks more than 13 billion years back in time and snapped the spectacular shot above. Those points and blobs are the first known generation of stars and galaxies to shine in an infant universe.

Researchers used NASA’s Hubble Space Telescope to find five tiny but bright galaxies clustered together 13.1 billion light-years from Earth. That means Hubble is observing them as they existed just 600 million years after the Big Bang, the dramatic event that brought our universe into existence.

Images made from every wavelength known to physics adorn screen savers and classroom posters all over the world, each a silent but powerful testimony to the age of the cosmos. But the capacity of young earthers to delude themselves is far more impressive than their actual intellectual prowess. They have a rather pitiful handful of apologetics to explain away this wealth of evidence, and like the Intelligent Design Creationist arguments against evolution, these shticks all rely on fooling the laypublic with modern sounding techno babble and good old-fashioned stone cold lying.

The most common are variations on tired light. Imaginary light would be more like it (Math geeks, please forgive the possible confusion with complex numbers here), as this apologetic asserts light somehow got plumb tuckered out and slowed down, a lot, before reaching earth. Or that over time light slowed down for some odd reason, only stopping its decline only when our ability to accurately measure it emerged. Oh baby, the conflicts this would cause in physics are beyond the scope of this blog. We’re talking textbooks full of science from a half dozen independent fields and scores of interdependent disciplines arrayed against it. But just for one example that we can all understand, if light slowed down by eight or nine orders of magnitude en route, all the way down to the tired pace of a mere 300,000 km per second, distant events, such as the decay of short lived isotopes in supernova remnants, would appear to us to be in very, very slow motion (Not to mention red-shifted below AM radio waves). They’re not, ergo the light did not slow down. And if light slowed down that much over time, Adam could have never gazed on Eve with organic eyes; she would be radiant indeed! I imagine her body heat alone would be blue-shifted into the flesh-melting region of the EM spectrum.

A related idea delved into wildly imaginative pseudoscience with hypothetical white-holes and Einstein-for-Jesus relativistics. White-hole comsology, the semi-official position of the Answers-in-Genesis girfters, maintains that space-time near earth was so distorted by a mysterious, massive reverse black-hole thingy, that it bent the very fabric of existence in just such a way to handily explain the zillion to one discrepancy revealed by any set of cheap binoculars. It’s rather fanciful actually, even a bit entertaining. This never before observed object conveniently disappeared just, apparently just before modern optical astronomy began.

But I think my favorite is the Omphalos Hypothesis AKA last Thursdayism. Omphalos would have God create the universe with the appearance of age. From distant quasars blasting out X-rays to craters on the moon and mid-ocean ridges on earth. A universe made by divine fiat 10,000 years ago to perfectly resemble one billions of years old. Of course it could have been made five thousand years ago, or after the Civil War, or last Thursday right down to the milk going bad in your fridge. The beauty is it’s completely untestable! It cannot be falsified, the two universes are by definition indistinguishable, thus it could be true — although what true would mean in last Thursdayism is not exactly clear. What is clear is this level of cosmic deceit would make the hypothetical producer of the whole grand facade the biggest liar in the universe, nothing and no one could ever come close to that degree of deception. Last I checked my Abrahamic theologies the title of Great Deceiver was held by another, less popular deity, so this really mixes things up!

It also brings up an interesting conflict with another fundie favorite, the watch in the desert. The old argument goes that finding a watch in the middle of a desert suggests a watchmaker. The desert being natural and the watch indicating an intelligent watch maker. Life is complex, like the watch, so the IDCists tell us life must be intelligently designed. But if everything was created by Yaweh, last Thursday or 10,000 years ago, or even billions of years ago, the desert and the watch are both intelligently designed. Which reduces to uselessness => If it looks designed then it is, and if it doesn’t look designed, then it is …

Now Showing: Mittens of Romney vs. Newton of Gingrich in The Bainwreck » « Must see: This is Tim Tebow to Jesus Christ