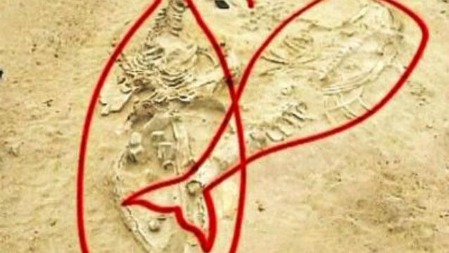 The Atacama desert in southern Chile is already famous in science circles. The pristine condition and almost non-existent cloud cover made it an ideal choice for the most powerful telescope complex on earth. But despite the climate and terrain, the region is now one of the coolest places in the world for research into whale evolution:

(IO9) — Some of the remains, like the ones pictured here, are actually overlapping. The excavation site measures just 20 meters wide by 240 meters long; explaining how the fossilized remains of over 80 marine mammals — including 25-foot-long baleen whales, a sperm whale, and an extinct dolphin species with walrus-like tusks — wound up gathered so closely together is high on the scientists’ list of unanswered questions.

Most people think whales are pretty cool, but creationists hate them. Reason being, whales are clearly land animals, mammals, quadrupeds, so obviously reworked by evolution that even pre-Darwinian naturalists suspected they descended from land animals. Decades of research have confirmed this early conjecture to the point that denying is irrational. We have transitional stages in whale evo preserved in the fossil record — backed up by the same kind of genetic evidence used in paternity and criminal court cases every day — linking a four-leg predator to an amazing mammalian analogue of a crocodile, and eventually onto the full-blown marine mammals we know today.

Finding them in a desert is a bit of inside joke; my comrades and I received an interesting email from a creationist likely to be published this Saturday in Daily Kos’ hate-mailapooloza. For now, let’s just say whales in deserts were brought up in that missive making the Atacama fossil-whale bed fortuitous and funny.