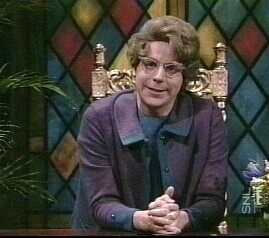 The guy who fired at the White House may have held a deep hatred for Obama and reportedly thought the US President was in league with Satan. Gosh, where could he have gotten that idea? I bet it wasn’t the Church Lady:

(CBS News) — Sources tell CBS News Ortega-Hernandez was not on the radar of the Secret Service before Friday’s shooting. But investigators believe he may have targeted the White House due to a hatred of President Obama. Businessman Monte McCall, said Ortega-Hernandez compared the president to the “Antichrist” when they met recently.

Kinda makes you wonder why he would think a pitiful AK 47 would be a match for not only the sitting US President and Commander in Chief, at home in the heart of his dark fortress, but who also happens to be a half-human fire-mage spawn of evil with +1000 hits points that can do 500 dps to mortals and biblical demigods alike.

Update from comments via Wet Rust: Having been a nut and read the Left Behind series I suspect he wasn’t trying to derail the end times but take his place in the prophecy. The theology includes the prophecy that the Anti-Christ will be struck with a fatal wound to the head, fall dead, and rise from the dead now as the physical incarnation of Satan.