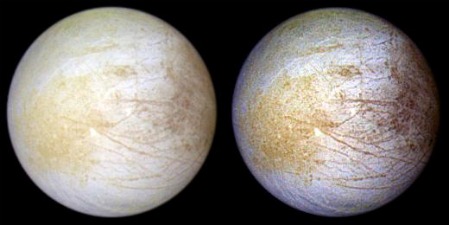 Europa, second satellite of Jupiter, has intrigued planetary scientists since Galileo first spied it and its three siblings through his telescope in 1610. It was these four satellites that exposed the theology of the Catholic Church for the fairytale it was at the height of the Church’s political power. When two Pioneer and two Voyager spacecraft barreled through the Jovian system in the 1970s, that interest turned into one of the most exciting fields in planetary astronomy. Europa is now perhaps the best bet for ET life, it may be one of the most earth-like worlds in our solar system in some respects, and new research suggests Europa not only has a vast subsurface, salty ocean, but that that ocean “breathes”.

When I was a kid the conventional wisdom was that satellites of the gas giants were cold, dead, quiet worlds like our moon. All that changed almost overnight when a Voyager 1 systems engineer named Linda Morabito worked with an image of Jupiter’s closest moon, Io, to eliminate an apparent optical defect. It was fat, domed cloud hanging over the moon’s limb. She puzzled over it for a weekend, trying to reproduce it by comparing it to other shots taken under similar lighting conditions and thinking about the optical gear. That Monday other team members looked at her results and agreed — it wasn’t a defect at all. It was a pyroclastic plume of Biblical proportions, expanding ferociously in Io’s low gravity and near vacuum. In just a few hours, using computer enhancement, the team found several other plumes on Io. It’s fascinating to think that for a few hours, three or four people sitting in a dark image room were the only ones of earth, and the first people in history, who knew earth was not the only world with active volcanoes Io.

The moons of Jupiter do indeed dwell in a cold realm, freezing, where carbon-dioxide is a mineral and water hard as steel. But the Galilean satellites orbit in resonance: the two next satellites out form Io, Europa and Ganymede, orbit Jupiter once for each two orbits the satellite below it completes. It’s an exquisite dance, orchestrated by the patient conductors of gravity and tidal interaction over eons. Io is so close to massive Jupiter that when these outer moons pass by it slightly stretches and compresses the little moon. That means heat and lots of it. Enough heat that the surface of Io is blazing hot to the touch in many places and undergoing massive eruptions all over. It is the most volcanic body in the solar system, saturated with sulfur compounds, a real-life vision of Hades right out of Dante’s sickest nightmare.

The thinking went that if Io is heated to melting, maybe the next moon out is warmer than thought. Analysis of Europa’s surface showed what appear to be hard ice. But ridges and other strange features, backed up by some hairy geophysics, strongly suggested a layer of liquid water between the surface and the presumably rocky metallic core. Astronomers began scouring images for features that might support or reject that idea.

With better images from the Galileo spacecraft in the mid 90s it became clear that Europa had a dynamic icy crust floating on something and that something was almost certainly liquid water. As marine scientists back on earth had already studied black smokers and cold seeps, biological communities completely independent of sunlight, excitement grew fast. The current view of Europa is an ice-shell 10 to 20 miles thick floating over an ocean maybe 100 miles or more deep above a rocky sea bottom. The core of Europa could well be hot enough that it resembles a less energetic version of Io. Europa could harbor a paradise for the same kinds of hardy, extremophile bacteria that support deep-sea communities on earth, similar to the way their evolutionary cousins, the chloroplasts, support living communities above.

But there’s a problem! We don’t know how hot Europa’s subsea mantle might be, and deep sea communities on earth may be cut off from sunlight but they’re not chemically isolated from the traditional biosphere. In particular gases and other substances are continually exchanged on the ocean’s surface. Our oceans breathe, the surface layer acts almost like a giant lung for the life concealed in the black depths below. Geologic processes below and that exhange at the surface are both essential, without them there would be no extremophiles clustering around black-smokers or languidly floating through methane seeps. There are substances on Europa’s surface that could render the liquid underworld more habitable to earth organisms. The tenuous atmosphere is almost pure oxygen produced by radiolysis of sublimating ice molecules. Nearby Io is pumping out sulfur compounds and other substances that could land like manna on Europa. That could be a big difference between our ocean and Europa’s vast subterranean sea capped by miles of thick ice. How would this ocean breathe?

New analysis of images obtained by Galileo may provide the answer. Europa seems to have something resembling plate tectonics, where plates of ice stand in for the granite and basalt rafts our terrestrial continents and oceans ride around on. And that alien version is powered by internal heat just like ours: 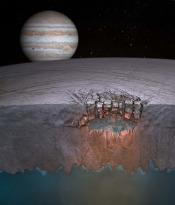 NASA simulation of lake and plume on Europa

(UT Austin) — The water could represent a potential habitat for life, and many more such lakes might exist throughout the shallow regions of Europa’s shell, lead author Britney Schmidt, a postdoctoral fellow at The University of Texas at Austin’s Institute for Geophysics, writes in the journal Nature. Further increasing the potential for life, the newly discovered lake is covered by floating ice shelves that seem to be collapsing, providing a mechanism for transferring nutrients and energy between the surface and a vast ocean already inferred to exist below the thick ice shell.

“One opinion in the scientific community has been, ‘If the ice shell is thick, that’s bad for biology — that it might mean the surface isn’t communicating with the underlying ocean,’ ” said Schmidt. “Now we see evidence that even though the ice shell is thick, it can mix vigorously. That could make Europa and its ocean more habitable.”

That’s exciting! Not only does it mean Europa’s ocean might breathe a little, it is consistent with the idea of large, healthy plumes under the ice which in turn suggest a dynamic mantle and core capable of producing black-smokers and undersea volcanoes. And that’s why you might see Europa in the news this weekend.

There’s a lot of analysis left to do, Galileo sent back thousands of images, more than enough to mint more Linda Morabitos. But the next major step is to land a probe on Europa’s surface, hopefully more than one, and maybe one that can move. Ideally, a probe trundling around near one of the icy seams or hot spots that make Europa look like a cracked egg from space where water wells near the surface.

If that environment is habitable it would have profound implications, for starters it would mean Europa might literally be terraformed to some degree by existing terrestrial microbes with no breakthroughs in genetic engineering or space travel, groomed for future colonization and development by humans or machine proxies. But what most planetary scientists would like to know, and what those future missions could discover, is if other organisms beat us to the punch on Europa by billions of years.