Some readers may recall that a couple of years ago, I made fun of a press release issued by the publishers of a book by Edward Feser that had the title Five Proofs of the Existence of God and claimed that “the existence of God can be established with certainty by way of purely rational arguments” (my italics). The point of my brief post was that life was too short to read yet another book claiming to prove the existence of any god since there have been so many failed past attempts. I said that if someone had actually come up with an irrefutable proof, that would be be earth-shattering news and reported all over the media and so I would wait and see if that a happened before wading through yet another theological treatise.
END_OF_DOCUMENT_TOKEN_TO_BE_REPLACED

I have tried to read some of the classics of English literature. In particular I attempted the works of James Joyce, including his most famous work Ulysses. I gave up early on in that book, deciding that what I was likely to get out of it was not worth the effort that I needed to put into it. It also made me wonder what purpose was served by the author burying the message under so many layers of metaphor, code, obscure allusions, and word play that it required years of study by professors of literature to explain it. This high level of difficulty has led to the suspicion that some of the people who claim to have read and enjoyed it have not really done so but are merely being pretentious.
END_OF_DOCUMENT_TOKEN_TO_BE_REPLACED

The first three chapters of my latest book are on the Amazon webpage. (Click on the ‘Look inside’ link.) The publisher’s webpage is here and you can also buy it from any major retailer. (Note: This will be the new top post for a while. Later posts are below.)

Reporter Nick Confessore has been digging into how Donald Trump Jr.’s book became a #1 non-fiction bestseller an it appears to be exactly as I suggested in a previous post, that the Republican National Committee purchased copies in bulk to the tune f $94,800. Confessore has the documentation to prove it.

New FEC disclosures show a single large RNC payment of $94,800 to Books-a-Million in October, a few days before "Triggered" was released. An RNC spokesman confirmed that the expenditure was connected to their promotion of Don Trump Jr.'s book. pic.twitter.com/vsmmsgrYCp

I think it is safe to say that Donald Trump Jr., the grifter son in a grifter family, would not be considered a deep thinker or a literary genius. So how did it come to be that the book he purportedly wrote rose to #1 on the New York Times non-fiction best-seller list? In fact, it is surprising how so many political books by hack politicians are advertised as ‘best sellers’ according to this or that publication.
END_OF_DOCUMENT_TOKEN_TO_BE_REPLACED

The subtitle of this book by investigative journalist Oliver Bullough pretty much says it all: The inside story of the crooks and kleptocrats who rule the world. If you recall, my review of the film The Laundromat (2019) dealt with how the firm Mossack Fonseca specialized in creating shell companies for people to hide their ill-gotten gains from their victims and governments. This book lays bare how the corrupt system works, providing multiple detailed examples from all over the world.
END_OF_DOCUMENT_TOKEN_TO_BE_REPLACED

I can vividly recall my strong negative reaction to Joseph Conrad’s highly acclaimed novel Heart of Darkness. Its racism appalled me as I wrote in a blog post ten years ago.

I remember the first time I read Joseph Conrad’s Heart of Darkness, hailed by critics as a masterpiece. I was appalled at the blatantly racist portrayals of Africans and could barely get through the book. Many years later, I re-read it. The shock and anger that the original reading had aroused in me had worn off and I could see and appreciate Conrad’s skill with words in creating the deepening sense of foreboding as Marlow goes deeper into the jungle in search of Kurtz.

Ironically, Chinua Achebe gave a talk criticizing the book and saying that Conrad’s novel, whatever its other merits, perpetuated African stereotypes. The talk attracted a lot of attention and Conrad’s many admirers leapt to his defense, saying that Conrad was a product of his times and merely reflecting the views then current and that his book was actually a critique of the evils of colonialism.

Maybe so, but the racism was still there and still bothered me even on the second reading.

END_OF_DOCUMENT_TOKEN_TO_BE_REPLACED

I am pleased to say that my book will be released next month and can now be pre-ordered. You can read more about the book and order it from the publisher here and at any other book retailers around the world, where you can get even bigger discounts. 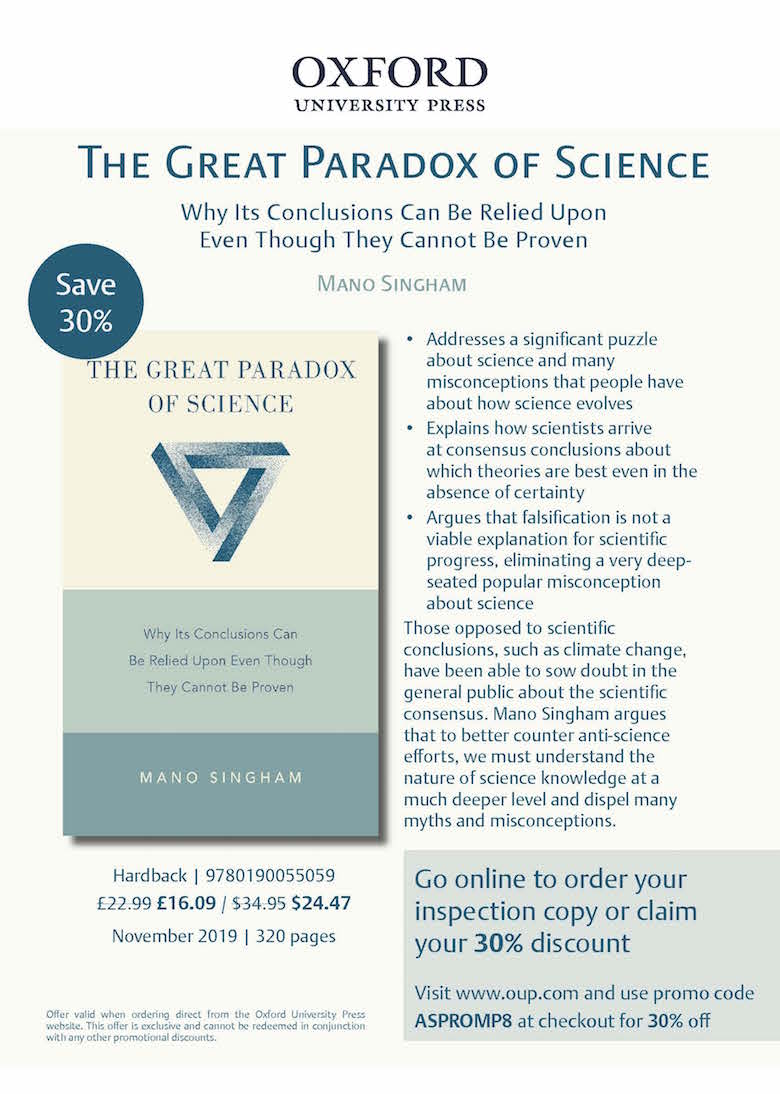 Yesterday saw the release of the film Avengers: Endgame, the latest in the franchise of superhero films based on the Marvel comic books. These films have been roaring commercial successes. I myself am not a fan of the genre and have watched just a couple (The Avengers and Spiderman: Homecoming) to see what all the fuss was about. I had not planned on seeing the latest film.

But last evening I got an email from someone I do not know in which the subject line, all in upper case, revealed what is apparently a major plot twist in this film. The person who had sent out the spoiler had gone to great lengths to make sure that every single person who might in any way be connected to my university (including alumni) was made aware of the spoiler. The address line contained the addresses of about 250 email address lists (not individual addresses) that seemed to cover pretty much everyone. I think my address was in the list of physics faculty, staff, students, and emeriti. This person had gone to great lengths to obtain all these email address lists, presumably by hacking into the university server that has the database that contains all of them.
END_OF_DOCUMENT_TOKEN_TO_BE_REPLACED