Probability can be deceptive. The concept sounds easy to understand and we glibly use the ideas in everyday life but there are many subtleties involved. Given how important probabilistic ideas are in life, some have suggested that it be introduced into school mathematics curricula much earlier than it currently is and discussed in more depth.

One subtlety can be highlighted by this example. Suppose that you read about a new study that finds that by taking some measures, you can reduce the risk of stroke by 50%. Should you adopt those measures?

To make a decision you need to weigh the benefit against the costs, which in this case may be that the measures involve taking medications that have rather serious side effects, or that the regimen involved is arduous, or that it is very expensive. But even taking those into account is not enough to decide because you need to know another key piece of information and that is the absolute risk numbers.

The relative risk is what is usually reported and quoted in the media. It is obtained by comparing the results of the test group with the control group. So if the test group has five positive cases and the control group has ten, then the relative risk reduction is 50%. But this ignores the importance of sample size that determines the absolute risk. If the sample size had been 10,000, the absolute risk would have dropped from 0.1% to 0.05%.

Paula Byrne, one of the authors of a recent study on the benefits of taking statins to lower cholesterol, says that focusing only on relative risk does not give enough information to make an informed decision.

Although there is a 50% relative risk reduction, is it a meaningful difference? Would it be worthwhile changing to this drug, particularly if there are side-effects associated with it? Absolute risk reduction presents a clearer picture and makes it easier for people to make informed decisions. 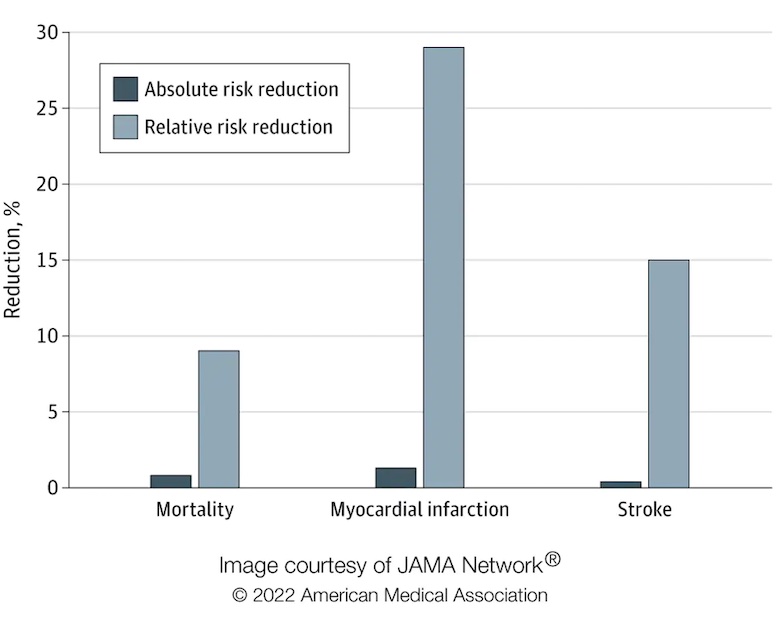 News reports tend to focus on relative risk reduction because the larger numbers are more newsworthy. But Byrne argues, based on the work of her group with statins, that people deserve to be given the fuller picture.

The likelihood of a person developing cardiovascular disease in the next ten years is expressed as a percentage. For example, consider an overweight 65-year-old man who smokes, has high blood pressure and total cholesterol. He may be at high risk of cardiovascular disease, compared with a 45-year-old, non-smoking woman with slightly raised cholesterol and blood pressure and no other risk factors. If a doctor were to assess their risk of dying in the next ten years, the estimated risk for the man might be 38%, for example, whereas the woman’s risk might be only 1.4%.

Now consider the impact of taking statins for both. According to the study, statins would reduce the relative risk of dying by 9%. In absolute terms, the man would reduce his risk from 38% to 34.6%, and the woman from 1.4% to 1.3%.

Patients and their doctors need to consider whether they think these risk reductions are worthwhile in a trade-off between potential benefits and harms, including the inconvenience of taking a daily medicine, possibly for life. This is particularly salient for low-risk people for whom the benefits are marginal. However, people perceive risk differently based on their own experience and preferences, and what might look like a “good deal” to some may be seen as of little value to others.

Extremely health conscious people may feel the need to adopt many measures that they are told will reduce the likelihood of getting some serious illness. But if you are in a low risk category, then the cost-benefit calculation using absolute risk may well yield a different outcome than if you are in a high risk category. In the statins example, when presented with the relative risk results, you might expect both men and women as described to take statins in roughly equal numbers. But if they are told the absolute risk, one would not be surprised if the women did not take them at all, unless there are other reasons to do so. This result also shows how important is the somewhat recent realization that such studies should disaggregate results according to gender and other diversity metrics rather than what had been the standard practice earlier, of using just men to represent the entire population.

If the costs of adopting the measures are low (in the case of the pandemic, such measures might involve getting vaccinated, wearing masks, and practicing physical distancing), then one might be willing to take the measures anyway because there is little lost. The difficult cost-benefit calculation is when the costs are high.

A set of podcasts worth browsing » « Great moments in cheerleading