As the election gets closer, people tend to increasingly look for indicators as to what the result might be. This has become more of an art form since the failure of polls to predict Trump’s win in 2016 has made people wary of opinion polls. This problem of polling uncertainty may be accentuated this year because the intensity of the hostility generated by Trump may have resulted in people being more circumspect in revealing their views to pollsters.

Polls should not be totally discounted however. One thing that has surprised me is that although this election season has been extremely turbulent, as might be expected with a volatile president who behaves impulsively resulting in one headline-making event after another, since around mid-June the polling has been remarkably stable, even more so than in previous years, as can be seen in this timeline of the predictions of the Economist model that factors into account both polls and the so-called fundamentals of the economy, such as economic and demographic data.

The timeline of poll averages provided by Real Clear Politics that only uses poll averages is a little more volatile for each candidate but the margin (the blue shaded area at the bottom) has not varied by that much either. 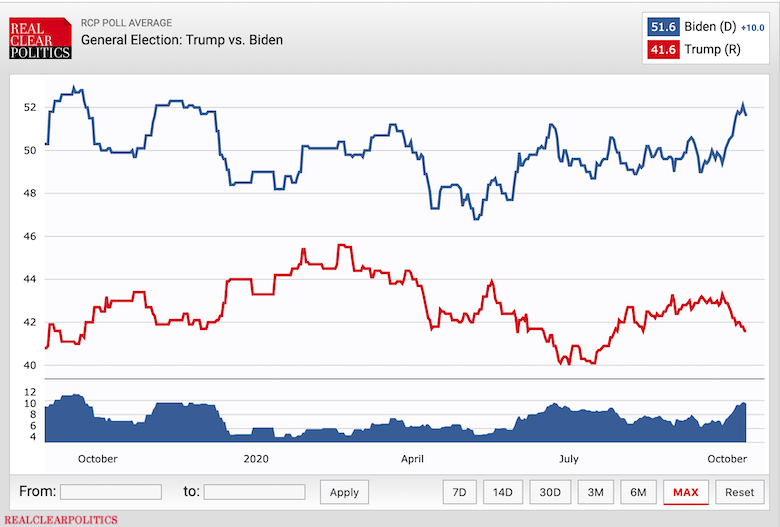 One reason for this stability might be that people decided very early on how they were going to vote. Once you make a decision, you usually stick with it.

Some observers are looking at alternative, more impressionistic and less statistically grounded measures than opinion polls. This is always a dangerous thing to do because we all tend to live in a bubble of family, friends, neighbors, and co-workers who are mostly like minded people, and this may give the impression that our own preferred candidate has more support than they actually have.

Reporter Tim Alberta tries to gauge voter sentiment by measures such as yard signs. This is a notoriously unreliable measure but he thinks he can glean something from what he has seen this year.

At the risk of fighting the last war, I’ve paid an unhealthy level of attention to yard signs over the past year, and particularly since Joe Biden sealed the Democratic nomination this summer. Having logged many dozens of hours this summer and fall driving around the country, two things have stood out.

First, the Trump/MAGA signage has multiplied in mind-boggling ways. Four years ago, it felt like the Republican nominee had reached a saturation point with his name dotting the landscapes of American communities. Not even close. This is obviously ballparking, but whereas in 2016 it seemed like we saw Trump logos on every ninth or 10th lawn, we now see them on every fifth or sixth lawn in those same neighborhoods. It’s a remarkable testament to the passion of the president’s base; it also indicates that the “shy Trump voter” is a thing of the past. The people who flew his flag in 2016 are still doing so; they’re now joined by countless more MAGA devotees, voters who might have once had reservations about Trump, or at least reservations about showing their support for him, but are no longer holding back. Whether the president wins a second term or not, this display of fervency reinforces my belief that we have never seen a politician with such a cult following, and we probably never will again.

The second thing that’s been striking is the Biden signage-not the volume of it, but rather the location. There’s no question Biden banners (and, more recently, Biden/Harris banners) are far outpacing the number of Clinton signs I saw four years ago. But that’s really not saying much. No, what’s been truly interesting is where the Biden posters are popping up. Just in the past few weeks, I’ve seen signs boosting the Democratic nominee (and affiliated liberal causes) in the blue-collar pockets of mid-Michigan and eastern Ohio; in the wealthy, well-educated, heavily Republican suburbs of Milwaukee and Cleveland; in the remote, rural towns of central Pennsylvania; and along the dusty desert highways of northern Arizona. When I say I’ve seen signs in these places, I don’t mean a couple small placards scattered here and there; I mean a conspicuous pattern of support, spread across areas where you wouldn’t expect to find it. And it hasn’t just been pro-Biden material; it’s been Black Lives Matter signs and LGBTQ rainbow flags and banners endorsing scientific expertise and women’s rights.

He also says that this year, despite the massive Republican efforts at voter suppression, we might witness a record turnout. Predictions of a record turnout are routinely made just before an election when feelings are running high but in my experience they usually don’t pan out. The last time the number of people who actually voted cracked 60% of the voting age population was in 1968. The highest since then was 2008 with 58%, Barack Obama’s first campaign. But Alberta thinks there are signs that this year will be different. I’ll believe it when I see it.

Alberta also warns that if Trump loses, it will not matter if he loses narrowly or by a large margin, because he is simply not going to go quietly. While a convincing loss will reduce Trump’s ability to claim that the result was fraudulent, Alberta says a landslide defeat for Trump will put the Republican Party establishment in a tough position.

If, on the other hand, the election is a blowout, and Trump is flinging wild accusations about wide-scale fraud and deep-state conspiracies to take him down, Republicans will be forced to choose a side. They will either stand with a battered soon-to-be-former president whose days in office are numbered whether he likes it or not, or they will stand with the democratic norms that have guided the nation for 244 years.

We are now on the home stretch. Expect more reading of tea leaves by pundits and analysts trying to find every possible indicator of the outcome.