From the very beginning of this pandemic, Donald Trump has downplayed the seriousness of it and avoided taking the tough actions required to curb it. Tim Dickinson has compiled a list of the 22 times that Trump has indulged in magical thinking, claiming that the virus would just go away all by itself, because of warmer weather or by some kind of ‘miracle’ or that it was not dangerous or some such nonsense, ignoring the warnings of public health experts that we needed concerted national action, and praising himself relentlessly for his non-action.

Most telling is his prediction on February 27th when 15 people had died in the US that in a few days the number would go down to zero. Now we are over 190,000 deaths and should reach the 200,000 mark before the end of this month. Since these numbers are truly staggering, Trump has resorted to making the false claim that only about 6% of these deaths can be blamed on the virus, a claim taken up by his fans who also believe that for some reason, people with an anti-Trump agenda are falsely inflating the pandemic threat. This article exposes the false reasoning behind this 6% claim.

Flawed reasoning: Because 94% of COVID-19 death certificates listed comorbidities, the author of the claim incorrectly reasons that only 6% of the deaths currently attributed to COVID-19 were actually caused by the disease. It is incorrect to assume that every patient who had COVID-19 in addition to other medical conditions died from the medical conditions and not from COVID-19.

Misleading: Comorbidities are medical conditions that weaken the patient and may lower their chance of surviving COVID-19 but are not the underlying cause of death. The claim fails to consider that doctors assess the entire chain of clinical events leading to the death of a patient in order to determine the cause. For deaths to be attributed to COVID-19, the clinical events assessed must be compatible with known COVID-19 symptoms.

Seeing all those statements laid out one after another in the Dickinson article as the death toll kept rising is a shocking reminder of how dangerously incompetent Trump is. And that is not even including his touting of dangerous treatments. His latest invocation of magical thinking was on August 31 when, with the death toll at over 187,000, he blithely said, “And we use the word “herd.” Once you get to a certain number, it’s going to go away.” Of course he does not specify what that number is but presumably it too will keep rising to be just above the total number of infected people (currently about 6.5 million people) , a mirage that keeps receding in the distance. And his devoted followers, urged on by social media such as Facebook, with spread this misinformation. 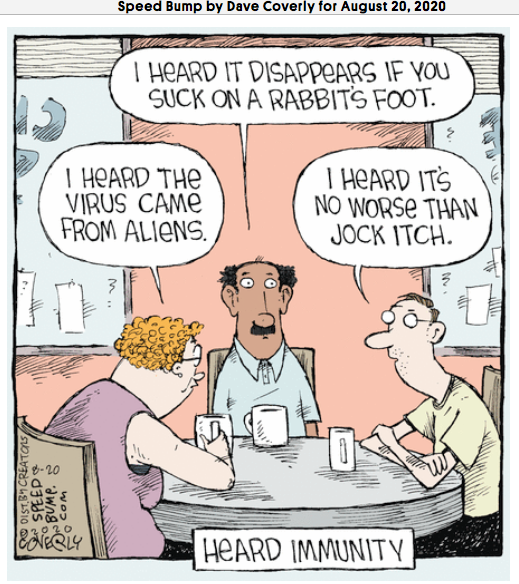