The head of the evangelical Liberty University has agreed to take the “indefinite leave of absence” asked for by the university’s Board of trustees after a suggestive photo appeared on the internet of him with his arms around the waist of a Peg Bundy lookalike on a yacht, with both of them showing their midriffs ,and he with his pants unzipped and holding a glass with dark liquid in it. 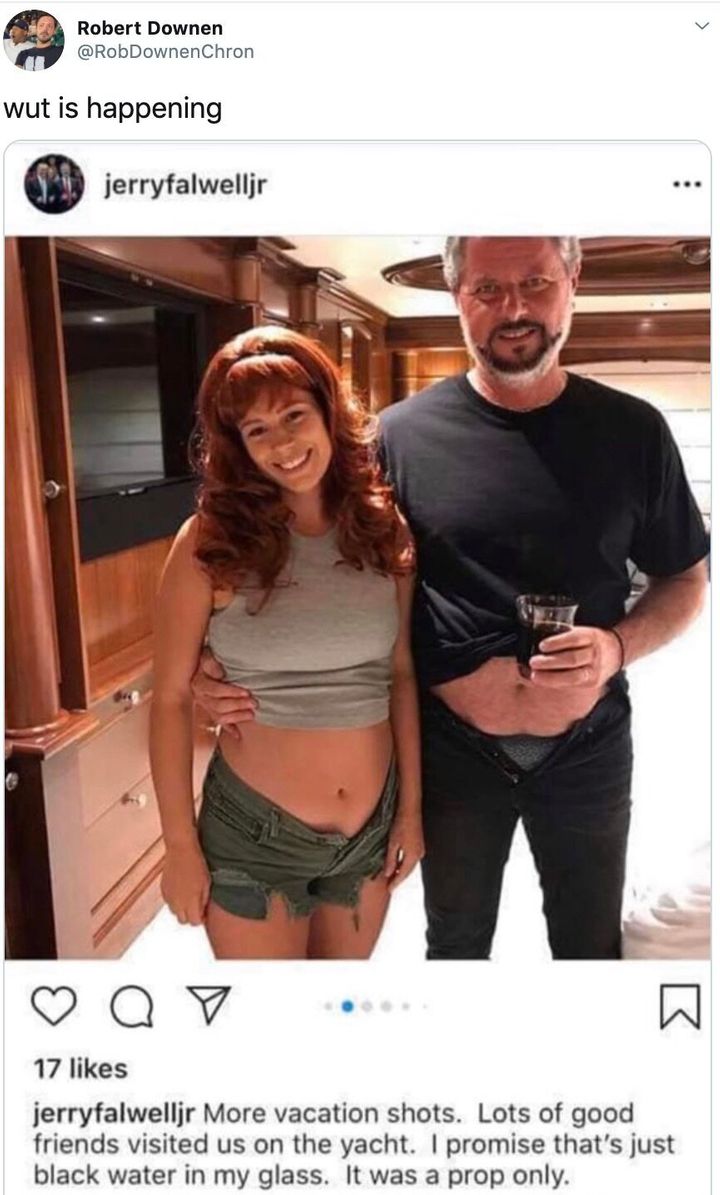 Liberty University has very strict puritanical rules against drinking and tight restrictions on the kind of interactions that students can have and if any students had been seen doing what Falwell did, he would have come down on them hard.

Liberty students are banned from drinking alcohol and are required to abide by a dress code that stresses “modesty at all times.”
…

Liberty student Clayton Didinsky, who is starting his senior year, told BuzzFeed News he and his classmates were “shocked” by Friday’s announcement but supported the decision for Falwell to take a leave of absence.

“I did not think this, of all things, would have done it,” Didinsky said. “My reaction to the whole yacht thing is that it was hypocritical. It’s obvious he was not drinking ‘black water,’ and students can’t drink, even if you’re 21.”

He added that students who do drink get into a lot of trouble if they get caught.

What is more is that this photo was not some paparazzi scoop. Falwell himself had posted it before the ensuing uproar made him take it down. He said it was just ‘good fun’.

What was he thinking when he posted that photo? Falwell seems to have some kind of death wish.

Liberty was slapped with a class-action lawsuit in April after Falwell insisted on keeping campus open during the coronavirus pandemic. And last year, several current and former Liberty University employees told Politico of multiple instances of questionable behavior by the school president, including his penchant for graphically discussing his sex life with staffers and fostering a toxic, fear-based workplace.

He has previously been involved in the weird ‘pool boy’ story, involved in shady real estate deals, as well as there being suggestions that he and his wife were swingers who had been photographed in compromising positions and that Trump’s then fixer Michael Cohen had arranged to have the photos suppressed.

Sometimes people who proclaim a very strict puritanical code like Falwell did, but live or want to live a libertine lifestyle, skirt very close to exposure, as if they want to be caught and thereafter openly live the life that they had kept secret. Hence they keep taking ever-greater risks. The preacher Jimmy Swaggart’s penchant for hiring sex workers is a case in point.

So maybe this exposure is the ‘liberation’ that Falwell secretly sought all along. Falwell was one of the earliest evangelicals to support Trump back in the 2016 election and brought other evangelicals along with him. Maybe he will now feel freed to openly do the kinds of gross things that his hero Trump brags about doing.