This is the time of year when we get bombarded with ‘best of’ and ‘worst of’ lists, increased by the fact that it could be for the year or for the decade. The only lists I pay attention to are of films by critics I respect to get tips on what might be worth watching.

This list of Things We Hope Will Die in 2020 is a little more interesting but the item that really jumped out at me and I wholeheartedly agree with is the suggestion by Jacob Rosenberg.

Malcolm Gladwell’s career: Let’s thinslice: Malcom Gladwell needs to stop writing. Gladwell’s theories are wrong (stop and frisk) or obvious (1,000 hours) or dumb (talking to strangers is the problem with everything). He made his bones at a time when glib, crypto-conservative contrarianism was the reigning media ethos. Today, the shtick has been worn so smooth as to be transparent. Flip through his latest book and you’ll find an easy-pass treatment of the Jerry Sandusky scandal at Penn State and a determinedly apolitical reading of the death of Sandra Bland—two cases of institutional pathologies that Gladwell turns into parables about a quirk in human nature. Powerful people thus get excused for their mistakes, under the guise of Gladwell’s interrogating some orthodoxy or another. You don’t need to be a bestselling author of pop-science airport books to come up with a word for this stuff: bullshit.

I have long been mystified by Gladwell’s popularity.

After watching the inscrutable film The Lobster, I decided I needed a break from high-brow art films and so decided to watch films that just entertained and did not tax the mind. And for that purpose, I have been on my own personal Cary Grant film festival. I first watched That Touch of Mink (1962) that co-starred Doris Day, then Alfred Hitchcock’s To Catch a Thief (1955) co-starring Grace Kelly, then my favorite Charade (1963) with Audrey Hepburn. Next in my queue if I can find them are Indiscreet (1958) with Ingrid Bergman and The Grass is Greener (1961) with Deborah Kerr, Robert Mitchum, and Jean Simmons.

Grant almost always plays a suave, witty, sophisticate. These old romantic and/or suspense comedies all provide the promise of being very pleasant and unchallenging. You can be sure that everything will end happily and that they will never take a sudden dark turn, though one false note that one should be prepared for is the casual male chauvinism on display that was taken for granted in those days but now strikes the viewer as jarring.
END_OF_DOCUMENT_TOKEN_TO_BE_REPLACED

When members of the Jewish community are attacked because they are Jewish, one immediately thinks that the attacker will be found to be a white man motivated by neo-Nazi ideology because it is such groups that have seen a recent resurgence in the US. And that usually does turn out to be the case. But two events recently have disturbed that pattern because they were committed by black men with unclear motives

Just two days ago an attacker entered the home of an Orthodox Jewish rabbi in Monsey, New York during a Hanukkah dinner and viciously attacked everyone present with a machete before running away. He was later captured in Harlem, covered in blood. He is suspected to have a history of mental problems
END_OF_DOCUMENT_TOKEN_TO_BE_REPLACED 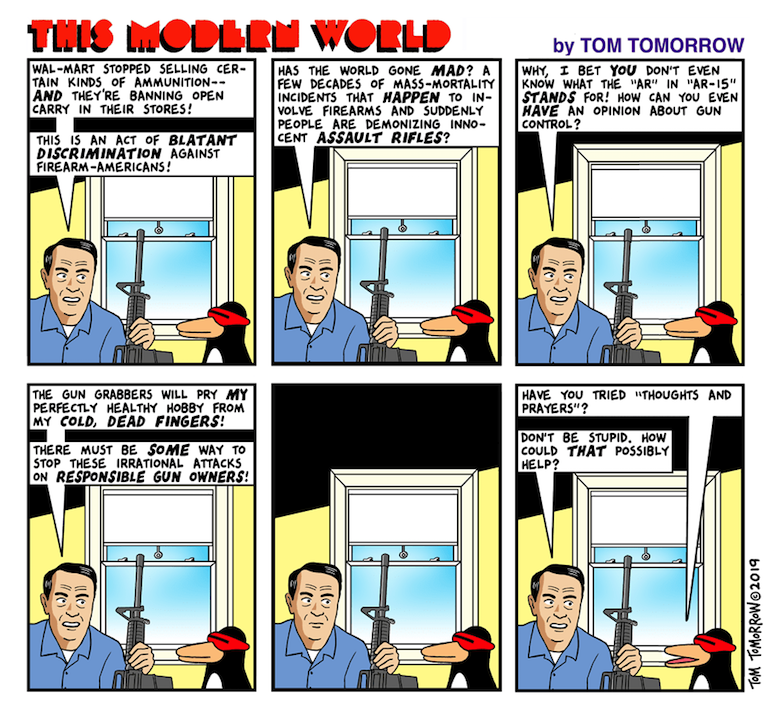 Last week I favorably reviewed the Brazilian comedy The First Temptation of Christ that has drawn protests from Christian groups because of its suggestion that Jesus may have been gay. Now the protests have spawned violent offshoots that have attacked the filmmakers’ offices with firebombs.

Police are investigating a fire-bomb attack on the Rio de Janeiro office of a production company behind a controversial Christmas special aired on streaming service Netflix.
END_OF_DOCUMENT_TOKEN_TO_BE_REPLACED

Jaime Hoffman, the athletic director of the liberal arts Occidental College, had a meeting with college’s general counsel, head athletic trainer, head football coach, and president and decided that because of the declining enrollment in their football program that resulted in too few eligible players to fully field a team and the danger that injuries posed to their smaller and more inexperienced players, that they cancel the remaining games of the season
END_OF_DOCUMENT_TOKEN_TO_BE_REPLACED

Those who recall the first Superman film starring Christopher Reeve will I am sure remember the scene where he is heartbroken that he could not arrive in time to save Lois Lane from death when she falls into a crevasse, if I recall correctly. So what does he do? He flies around the world at high speed in a direction opposite to the Earth’s rotation and by doing so he reverses the flow of time so that events go backwards and Lois emerges from the depths and he can rescue her. This was laugh-out-loud funny bad science.
END_OF_DOCUMENT_TOKEN_TO_BE_REPLACED

The fallout over the editorial in the evangelical magazine Christianity Today calling the impeachment and removal of Donald Trump continues with an editor from another publication The Christian Post resigning after the magazine decided that they would write an editorial in support of Trump.

Evangelical support for US President Donald Trump is back in the spotlight after the resignation of a leading journalist for Christian Post magazine.

On Monday, journalist Napp Nazworth announced he was “forced to make the difficult decision to leave The Christian Post”.

Mr Nazworth – a political editor and near 10-year veteran of the Christian magazine, whose Twitter biography includes the hashtag #NeverTrump – said the publication “decided to publish an editorial that positions them on Team Trump”.

He continued: “I can’t be an editor for a publication with that editorial voice.”

END_OF_DOCUMENT_TOKEN_TO_BE_REPLACED

This is one truly weird film. I watched it because the capsule description said it was a comedy and it had many well-known good actors such as Colin Farrell, Rachel Weisz, Olivia Colman (who seems to be in everything these days), Ben Whishaw, and John C. Reilly. I did not laugh even once. Instead I watched it with a kind of curious fascination, trying to figure out to what the hell it was all about, what message the film makers were trying to convey. I still don’t know.
END_OF_DOCUMENT_TOKEN_TO_BE_REPLACED

Donald Trump panders shamelessly to the US military and one of the things he has done is pardon those people who have been disciplined by the military for doing awful things. This despite the fact that the military is very reluctant to punish wrongdoing done to the victims of US wars and invasions and even when it rarely does so, the punishments are very mild. The case of Eddie Gallagher is particularly striking.

Video recordings of testimony given by Gallagher’s troops have emerged where they say that he was ‘evil’.

A Navy Seal platoon leader controversially cleared of war crimes by Donald Trump was a “toxic” character who was “OK with killing anything that moved”, according to fellow Iraq veterans who reported his conduct to military investigators.
…

Gallagher was convicted in July of posing with the dead body of a teenage Islamic State captive he had just killed with a hunting knife. He was granted clemency by the president in November in a decision that angered military chiefs.

In the interviews, conducted by navy investigators looking into Gallagher’s conduct during a tour of duty in Iraq in 2017, fellow platoon members told of a ruthless leader who stabbed the captive to death for no reason then forced his troops to pose for a photograph with the corpse.
…

At his court martial, Gallagher was acquitted of murder but demoted in rank for the lesser charge of posing with the body – a decision Trump reversed.
…

Another platoon member, medic Corey Scott, said: “You could tell he was perfectly OK with killing anybody that was moving.”

Note that the only punishment Gallagher suffered for his atrocities was a demotion in rank but even that was too much for the panderer-in chief.

Imagine what would be the reaction if some Iraqi or Afghan person had done something similar to a US soldier occupying their country and had then been pardoned by the political leadership.

But the US has never cared about the fact that it is a rogue state that has double standards. It takes that for granted.