The European Union elections have been released and it looks like the fears of an overwhelming victory by the Euroskeptics did not materialize. They did do better than they did in the 2014 election but did not gain enough seats to seriously challenge the existence of the union. As far as I can tell about how elections to the EU parliament work, the elections for seats are held in each country and contested by parties in those countries, but then those elected members form umbrella parties with like-minded members from other countries. The Guardian provides a graphic of the provisional results for each of the 10 umbrella parties in the 750-seat assembly.

The next step for distant observers like me is identifying what those groups stand for, and another helpful graphic identifies the policies associated with each, how the UK parties align with them, and what well-known European leader can be most closely identified with it. 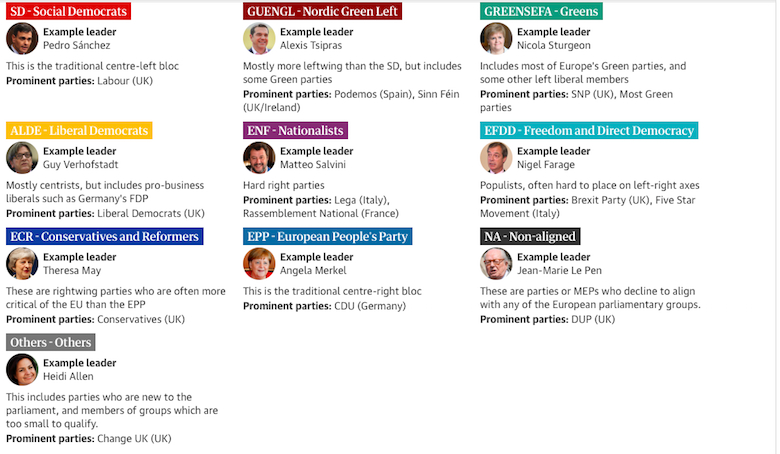 It looks like the hard Euroskeptics represented by the Nationalists (key supporter being Matteo Salvini of Italy) and the Freedom and Direct Democracy party (key supporter being Nigel Farage of the UK) have secured a total of just 112 seats, better than before but nowhere close to forming a ruling bloc. So at worst they can be a disruptive nuisance but cannot seriously undermine the working of the EU parliament. Credit for muzzling their ambitions is being given to pro-Remain voters, especially young people, who voted in larger numbers than in previous EU elections (50% this time versus 34% in 2014) to show their support for the EU.

In the UK, the results were similar. As polls had predicted, Farage’s Brexit party won the most seats with 29 of the 70 seats declared but its sister party Ukip did not win any. In terms of vote totals, the hard Leave parties (Brexit and Ukip) won 34.9% of the vote while the strong Remain parties (Liberal Democrats, Green, SNP, Change UK, and Plaid) got 40.4% of the vote and won 27 seats. The two main parties Labour and Conservative that tried to straddle the issue lost badly, with a combined vote of 23.2% and just 14 seats. Labour won 10 seats, down from 20 before while the Conservatives gained just four seats, down from 19 before. So basically, the UK results could be seen as a wash in terms of whether to Leave or Remain but was clearly a repudiation of sitting on the fence and not taking a stand either way.

The fallout in the UK has been swift. Labour leader Jeremy Corbyn has said that he will now support a second referendum on any Brexit deal, something that many Remainers in his party had been urging him to do but which he had steadfastly refused. On the Conservative side, Theresa May has said that she will resign on June 7, opening up a major battle for the leadership of the party and consequently the prime ministership, If there is anyone who deserves to be described by the adjective ‘hapless’, it is May. She is truly out of all haps. One feels almost sorry for her. Selected as party leader to find a way for the UK to leave the EU (thanks to David Cameron’s blunders in the first Brexit referendum), she failed miserably, first disastrously calling for a general election and then going it alone for far too long before broadening the base of decision-making on what quickly became clear was a very complicated issue. As a result, party discipline completely broke down and, even worse, so did cabinet discipline with people in her own party constantly sniping and undermining her and resigning in droves. Any successor to her will face the same intractable issues and may well be the next victim claimed by the Brexit train wreck, lasting even less time than May.

Thanks to reader Kevin, I came across this interesting animation narrated by Stephen Fry that follows the money. It says that the Brexiters built up a false narrative of the EU parliament undermining national sovereignty by completely controlling nations when in fact the only issues it deals with are those that require transnational actions to succeed, such as air quality and tax avoidance. The video argues that some of the real forces behind the push for Brexit are doing so because it will enable the wealthy elites in the UK to move in the direction of Trump’s America, by privatizing currently public services such as health care and lowering their taxes enabling the transferring of their capital to tax havens without the monitoring by the EU laws that tried to block such moves.