There are 31 new Republican members of the House of Representatives and 40 new Democrats. How do they compare in terms of diversity? I think this one emoji-based representation pretty much captures the difference. 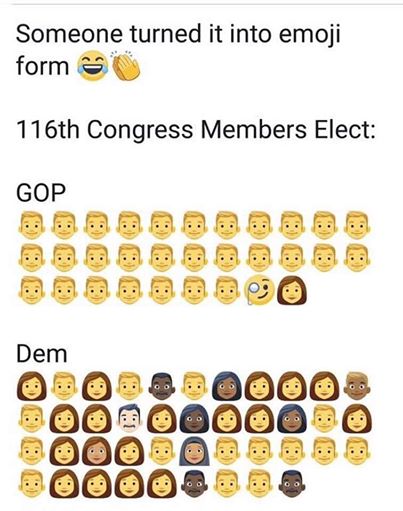 For the Democrats, just 15 of the 42 (35%) are white men and 22 (52%) are women. The diversity on the Republican side is dismal. Among the new crop of Republicans, 97% are white men. There is not a single person of color and only one woman, Carol Miller of West Virginia. I was puzzled by the lone GOPer with the monocle. If it was meant to represent a plutocrat, then surely there should be many more? But then I compared the emojis with photos of the actual faces and realized that it must refer to Texas congressperson Dan Crenshaw who wears an eye patch, though why they chose to highlight that one feature is unknown. The creator of this image must be sorry that there was no pirate emoji they could use. 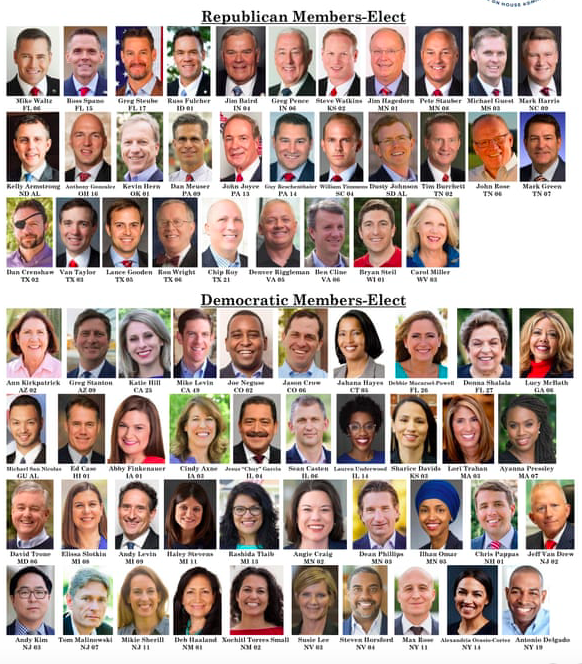 Mia Love, the sole GOP woman of color in the outgoing congress, finally conceded defeat in her election in Salt Lake City, making the incumbent membership of the GOP even less diverse. In the new Congress as a whole, the “proportion of white men within the Democratic caucus is set to drop from 41% to 38% next year, while the same percentage is set to rise among Republicans from 86% to 90%.”

The Democrats, at least in terms of color and gender, are far more like the country as a whole while the Republicans are truly the party of white men.