Commenter Dunc made the astute observation in response to an earlier post about North Korea that we tend to overlook the importance of commercial shipping routes when discussing geopolitical strategy. He says that the only reason the US cares about either Korea is because of the nearby shipping routes and he linked to a map (below) that describes the core and secondary maritime routes and the primary and secondary choke points. He says that much of the maneuvering of nations can be understood by seeing its relationship to shipping. 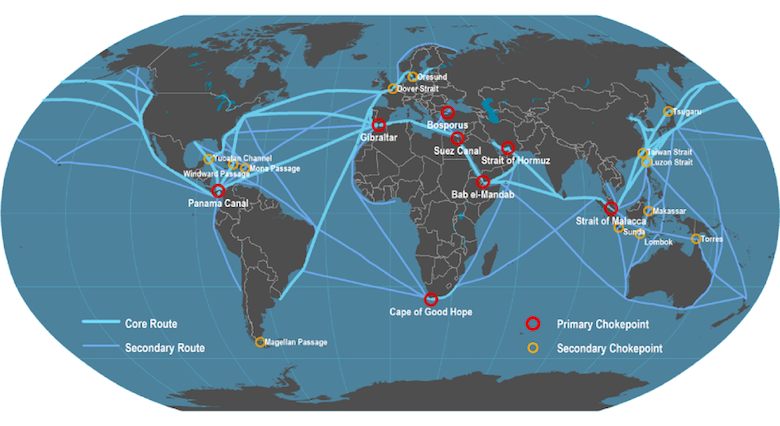 At almost the same time his comment appeared, I came across this news item that said that China had just signed a 99-year lease agreement with the government of Sri Lanka for the complete rights to the control and development of a new harbor that they helped build in Hambantota on the southern tip of the island (see below), which the map above shows is a key hub on the core East-West shipping route that connects three primary chokepoints. Chinese control also extends to 15,000 acres of the surrounding land for a new industrial zone, leading to the displacement of all the villagers in the area, not to mention disruption of wildlife habitats. That region is also close to a national park and home to elephants and other wild animals, while blue whales swim in the oceans near the harbor. This has led to some protests. 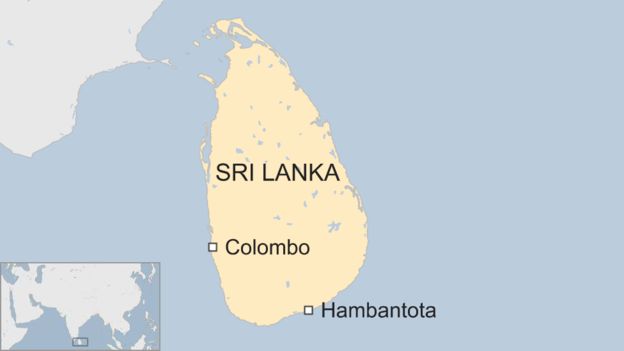 This deal shows how China is skillfully wielding soft power. For a long time, China has been giving huge loans to Sri Lanka on very generous terms that have gone into rebuilding infrastructure such as roads, airports, harbors, and other development projects. The previous Sri Lankan government was seen as being too close to China and there were reports that the US and India had secretly funded opposition parties during the last election a couple of years ago in order to bring down the government and replace it with one friendlier to the west. (Remember the rule: It is the god given right of the US to interfere in the elections of other countries but if any country intervenes in US elections, however slightly, that is a monstrous crime on the scale of Hitler invading Poland.)

So why did the new government that was presumed to be very pro-western give China this lease? It looks like money played a big role. While the Chinese government has been loaning huge amounts of money to Sri Lankan governments for a long time irrespective of their ideological leanings (and some of which very likely covertly enriched politicians and business leaders), the money has to be repaid and the government signed this lease in order to do so. I have no doubt that this was a long-term goal of China and they have skillfully achieved it.

This shows the big difference in the way that the US and China are operating in the developing world. While US ‘aid’ to countries is often in the form of military equipment and the US is also destroying countries by bombing them directly or through proxies such as NATO or Saudi Arabia or by arming rebel groups to destabilize governments, China is identified with building projects that are improving infrastructure in many developing nations Asia and Africa, like they have done in Sri Lanka.

Guess which country in winning the propaganda war?

A gang of women in burkas? » « Great moments in driving