This photograph created alarm among far right-wingers in Norway because it seemed to show a posse of women in burkas traveling on a bus, thus proving to them the ‘Islamization’ of that country. 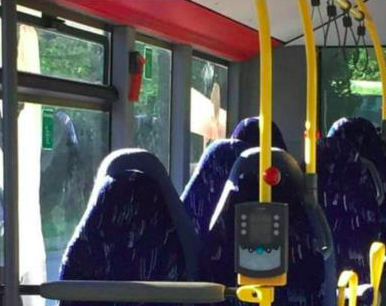 Here are some of the comments posted on (where else?) Facebook.

Responses included how “frightening”, “tragic” and “scary” the scene was, while others worried the non-existent passengers could have “weapons and bombs” under their garments.

“It looks really scary, should be banned. You can never know who is under there. Could be terrorists with weapons,” one member wrote, according to Norweigian English-language site thelocal.no.

“Get them out of our country, those who look like collapsed umbrellas. Frightening times we are living in,” wrote another.

The problem was that what the photo shows are just empty seats on the bus. Man, these right wingers sure do scare easily, probably startled by even their own shadows.