Yesterday, I wrote about the story of the stand for justice taken by Tommie Smith, Peter Norman, and John Carlos at the 1968 Olympic games and how they all suffered for their action. Today, I want to highlight another story that is more puzzling, where an athlete seemed to be actively endorsing the repression of her own ethnic group.

The 1936 Olympic games held in Berlin are legendary. Adolf Hitler hoped to use them to show the world the power of Germany and the superiority of the Aryan race, but what most people remember is African American Jesse Owens striking back against that ideology by winning four gold medals in the marquee events of 100m, 200m, long jump, and 4x100m relay.

I was not aware, however, about the story of Helen Mayer, a German Jew, who won the silver medal for fencing. On the victory stand she gave the Nazi salute that now seems so out of place given how badly the Nazis were treating Jews even before the war began. 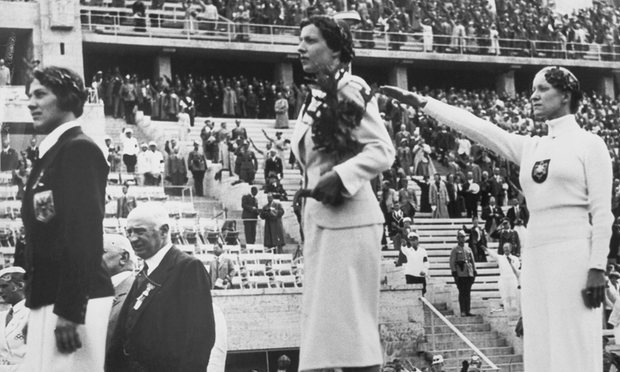 Why did she do it? The answer is not clear.

Almost 80 years to the day the photo was taken the woman, Helene Mayer, remains one of the Olympics’ great mysteries. She was, by definition of German law at the time, part-Jewish, which had cost her most of her citizenship rights. Her country’s press was forbidden to mention her name. Once she had been one of Germany’s most beloved athletes, but by that afternoon she had been living a four-year exile in the US, unwanted by her homeland. So why did she throw out her arm in tacit acceptance of so much hate?

The simplest answer is that she had no choice but to give the Nazi salute that day. For a German athlete, the thrusting of her arm on the medal stand was a non-negotiable requirement of the state. Failure to do so would have led to serious repercussions. But the bigger question, the one that has vexed historians, biographers and holocaust experts for eight decades, is why she was there. Was she naive? Was she oblivious to the atrocities Adolf Hitler was already committing? Did she know how the world would view her participation on what would become known as the Nazi Games? Did she care? Was she protecting her family? Was she protecting herself?

The reality is complicated Mayer, who died young at 42 did not leave an endless trail of correspondence. She did not live long enough after World War II to give revealing interviews in a modern media world.
…

“I think she still is a mystery,” says Susan Bachrach who as curator for special exhibitions at the United States Memorial Holocaust Museum has spent years researching Mayer for an exhibit on the 1936 Olympics.

“What do I think of her? In the end, a selfish person,” says New York filmmaker Semyon Pinkhasov who made a documentary about Mayer in 2008 called: What if? The Helene Mayer Story.

In the light of what we know today, Mayer’s action does indeed seem hard to understand. But we can try. I am not a World War II historian but as I understand it, in 1936 the full extent of Hitler’s eventual horrors had not been unleashed and the level of his discrimination against those whom he perceived as non-Aryans was not widely known. Since Mayer had been living in the US since 1932, she may not have felt as acutely the real hardships that Jews in Germany were experiencing.

We know that Olympic-caliber athletes are driven by a powerful desire to compete and the Nazi salute may have been seen by her as merely a distinctive gesture of patriotism, the way that many Americans today drape themselves in the flag after winning a medal, wear the flag pin, and put their hand over their heart when the national anthem is played. She may have felt that giving the salute was a small price to pay for her ambition to take part in the games and win a medal.