The Washington Post highlights some interesting results from a new Pew Research Center Survey about atheism and the electorate, the key one being that their has been a dramatic rise in the number of people who say they are not religious when compared to just eight years ago, 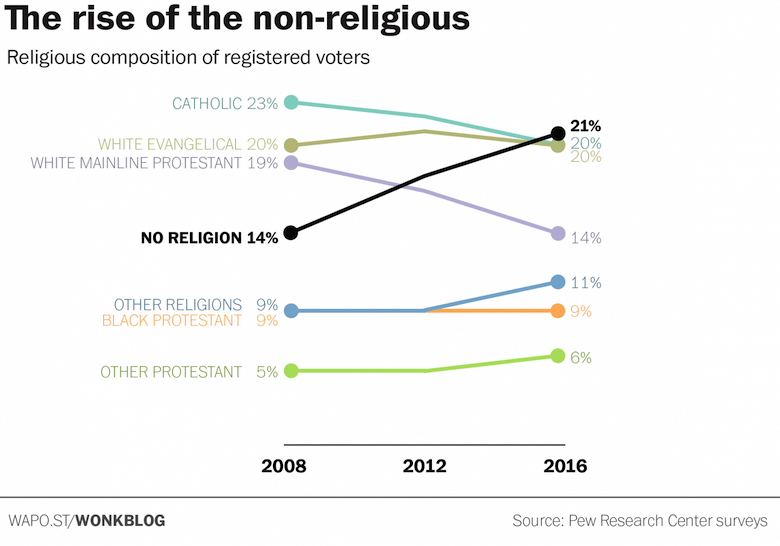 More American voters than ever say they are not religious, making the religiously unaffiliated the nation’s biggest voting bloc by faith for the first time in a presidential election year. This marks a dramatic shift from just eight years ago, when the non-religious were roundly outnumbered by Catholics, white mainline Protestants and white evangelical Protestants.
…

The growth of the non-religious — about 54 percent of whom are Democrats or lean Democratic, compared with 23 percent at least leaning Republican — could provide a political counterweight to white evangelical Protestants, a historically powerful voting bloc for Republicans. In 2016, 35 percent of Republican voters identify as white evangelicals, while 28 percent of Democratic voters say they have no religion at all.

I find it hard to believe that the number of non-religious has risen so dramatically because unbelief itself has increased. I suspect that it is that more people now feel freer to identify as unaffiliated than before as the stigma around it slowly dissipates. More of us are coming out of the closet, similar to the way that the LGBT community has greater freedom now to be themselves. The catch is that the non-religious tend to vote at lower rates than the religious.

But there are other good signs.

Still, the Pew study finds other evidence that religion may be becoming a less potent force at the ballot box. In 2008, for instance, 72 percent of voters said it was important for a president to have strong religious beliefs. That number is down to 62 percent today.

Similarly, Americans see religious institutions as playing a smaller role in the public sphere. In 2008, 75 percent said that churches and other houses of worship contributed a great deal to solving social problems. Today, that number has fallen to 58 percent.

Pew also has a list of 10 facts about atheists. Item #2 says that atheists skew younger and male than the general population. Oddly, item #4 finds that 8% of those who call themselves atheists also say they believe in God or a universal spirit and 2% even say they are absolutely certain about it. This strangeness goes the other way too, with 9% of the population saying they do not believe in God or a universal spirit and yet only 3% actually calling themselves atheist. That last discrepancy may due to a still residual stigma surrounding the word atheist, as can be seen in item #8 where atheists rank at the bottom (along with Muslims) on the scale of being liked.

You can see more detailed survey results about how religious beliefs influence the current election here which finds that white evangelicals are even more supportive of Donald Trump than they were of Mitt Romney in 2012, though Romney surely seems more authentically religious than Trump. But what drove many evangelicals to vote for the Mormon Romney in 2012 or for the dubiously religious Trump this year, despite misgivings about them both being not truly evangelicals, is opposition to Obama and Clinton.

Basically the lesson is that evangelicals overwhelmingly vote for reasons like gun policy, the economy, terrorism, immigration and abortion rather than religion.