Scientists at both NASA and the National Oceanic and Atmospheric Administration (NOAA) have announced that 2014 has been determined to be the warmest year since 1880, when instrumental records started being kept. In addition, they say that the “10 warmest years in the instrumental record, with the exception of 1998, have now occurred since 2000”.

Kevin Drum points out that climate change denialists have been artfully using a feature of statistics to deceive their followers to think that there has not been an increase in temperatures. They have used an unusually warm year to try and show that warming is not occurring. How did they do that?

When you plot a graph of any quantity that fluctuates over short time intervals and want to show long-term effects, the choice of starting point is very important. As Drum says, when it comes to the warming of the planet, denialists love to show the year-to-year temperature for the period 1998 to 2012 because it looks like there has been no change at all over that period.

The year 1998 was an outlier, an unusually warm year. If you choose this as your starting point, the next decade will look pretty uneventful. You can do the same thing with lots of other decade-long periods. For example, 1969-85 looks pretty flat, and so does 1981-94. This is typical of noisy data. Planetary warming isn’t a smooth upward curve every year. It spikes up and down, and that allows people to play games with the data over short periods. Add to that the fact that warming really does appear to pause a bit now and again, and it’s easy for charlatans to fool the rubes with misleading charts.

If you shift the two ends by just two years to cover the period 1996-2014, suddenly you see an increase. Of course, what one should do is show the temperatures over a large range for which we have good data of actual global temperature measurements such as for the period 1900 to 2014, and then you see an undoubted increase. 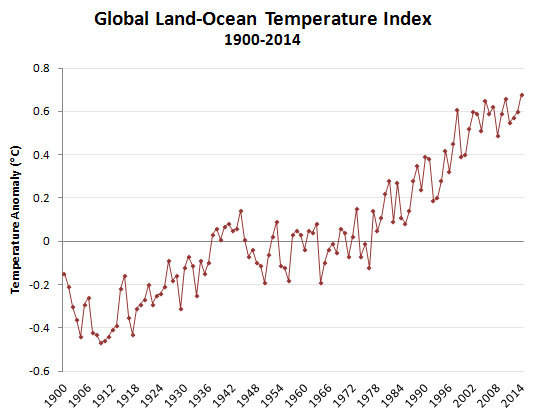