The political world was caught flat-footed by the sudden interest expressed by Mitt Romney in running again for the presidency. The surprise was generated by two things. One is that Romney had already made two attempts and lost, once losing the nomination to John McCain in 2008 and then the presidency in 2012 and it was felt that a two-time loser should gracefully bow out. The other is that Romney and his wife had repeatedly said that they had had enough and that it was time to move on.

So why the change of heart? Clearly it is because Republicans feel that they have a genuine shot at winning the presidency in 2016 as seen by the vast number of people who have either openly declared their intent or set in motion the things that candidates do, such as ingratiate themselves to wealthy donors, set up exploratory committees, recruit campaign staff, publish ghost-written books, give broad policy speeches, and visit Iowa. The numbers of such people are so great that even a political junkie like me cannot remember them all and I found this cartoon of the hopefuls helpful, though I cannot recognize a few people. 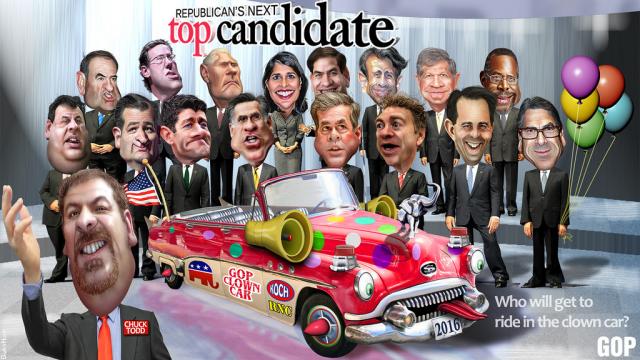 But even that cartoon is out of date because senator Lindsey Graham has recently expressed interest and Ryan has said that he will not run, though that could change. All it would take is for Sarah Palin and Michele Bachmann to announce their candidacies for the clown car to be complete.

I doubt that Palin will run. She is a grifter who is smart enough to have mastered the art of milking the rubes out of their money without much effort and won’t want to give up that cushy gig for a quixotic run that will require hard work, though she will coyly drop hints to get attention. Bachmann is another story. She seems to be delusional enough to think, like several others, that the voices in her head is god calling her to be president so her entry would not surprise me in the least. I would not be surprised to see Newt Gingrich throw his hat in the ring again either. And what about Herman “9-9-9” Cain?

Given this bountiful crop of crazies who think they can be president, one can understand Romney, who has grown up thinking that he is better than everyone else and deserves to be president, wondering why he should let people who are inferior to him seize the wide opening that they all seem to think exists for an easy Republican victory in 2016.

What I have found a little hard to understand is the negative reaction his expressions of interest have aroused in the party establishment, the very people who so strongly backed him in 2012 and helped him ward off one insurgency after another by throwing their money and clout behind him whenever his candidacy looked like sinking under the water. Bachmann, Cain, Gingrich, and Santorum all looked at various points like they might topple him during that campaign but Romney was able to beat them off with lots of money and strong party backing.

So why is there no love for Romney this time from the party establishment? The fact that Romney had his chance and lost is proffered as an explanation for why he should not run again. But Richard Nixon lost in 1960, then lost the race for governor of California in 1962 and then, after implying that he was leaving politics by famously saying that the media would not have him around to kick anymore, came back to win in 1968. The sainted Ronald Reagan ran for the Republican nomination twice and lost before gaining it and then winning the presidency. Maybe the establishment feels that there should be only one establishment candidate to rally round and this time they anointed Bush to be the person who carries out the agenda of the one-percenters.

The one person who is justified in feeling aggrieved by all this attention on Romney and Bush is Rick Santorum who finished strongly in 2012 but ran out of money. He even was robbed of the Iowa caucuses, the crucial first test of popularity, when Romney was erroneously declared the winner when in fact Santorum won. Santorum has a right to think that as the runner-up last time, he should be considered the heir-apparent this time rather than as a fringe candidate, despite (or perhaps because of) his religion-based extremist social views.

Money of course is going to be the deciding factor. It always is. It used to be a smaller amount was available for campaigns and where that big money went would quickly coalesce support for one candidate. But the Supreme Court verdict in the Citizens United case (whose fifth anniversary is today) has opened the floodgates for much more money, enabling more candidates to stay in the race for longer since it enables one wealthy person to subsidize a candidate, so that elections have now become like thoroughbred racing where wealthy people field candidates instead of horses. In 2012 Rick Santorum was fielded by Foster Friess and Newt Gingrich by Sheldon Adelson.

An interesting feature of the race is that some Republican candidates, vocal supporters of the plutocracy though they are, are beginning to talk about income inequality as a serious problem! This shows how the Occupy Wall Street movement, with its relentless message of the 1% vs. the 99%, has changed the terms of the debate, at least when it comes to framing a key issue. But we should not think that Republicans have changed their policies. People like Romney are merely seizing on the zeitgeist as a rhetorical strategy and will argue that the reason for the massive inequality is because of past liberal policies and the way to reduce inequality is by giving tax cuts for the rich, which is their prescription for every problem, even Ebola.

What is going to be interesting is to see is how the debates shape up, with all the pandering that the less well-financed candidates are going to do to attract both the moneyed interests and the crazy party base. Which issues will be seized on as litmus tests of fidelity to conservative causes has not yet been settled. The GOP has announced that there will be at least nine debates starting in August in Ohio, with three others pending, down from 26 in 2012. It seems unlikely that the party will allow nearly 20 people into the debates so they will likely use some cut-off mechanism (based publicly on polls but privately on money) to eliminate some of them and this is going to cause major heartburn for the eliminated hopefuls and their supporters.